Sniper Elite v2 is the video game where you shoot a man in his testicles in slow motion. It’s the game where the camera flips into Superman’s x-ray vision to reveal a man’s two glossy pink nugs, which had been resting with improbable neatness inside their filthy grot-pouch for the entire war, and then shows a hot bullet whizzing through one or both of them before zipping out the other side, all covered in blood and confused gametes. “Not today,” you gloat triumphantly at the popped nutsack as it flies around like a burst hot air balloon in a cartoon, “your reign/rain of insemination ends here”. Haha! Video games.

Sniper Elite 3 improves on the game’s infamously gory killcams. Now, when murdering a man, you’ll see all new muscular and circulatory systems, allowing you to shoot a Nazi in hisbloodor through a meaty glute. Rebellion say it’s all in aid of reminding the player of the horror and reality of the sort of bodily wreckage that a sniper’s bullet causes. Especially to a pair of balls. Fair enough. That’s probably what I’d say too if I’d made an asbolutely horrifying testicle-blasting simulator that my mam might see.

But Rebellion haven’t just been sprucing up their violence porn for the new Sniper Elite, they’ve also sought to rebuild the series from the boots up. They’ve shifted Sniper Elite 3 from the dreary, metal and mortar fronts of beleaguered Germany to the sun-scorched and sand-blasted desert canyons of Northern Africa, where levels are now three times bigger, freely roamable and wigglier around the edges. That’s a change from the boxier confines of the more urban focused Sniper Elite v2, and one that enables sniping at much greater distances, which is very much one of the core ideas of the game. 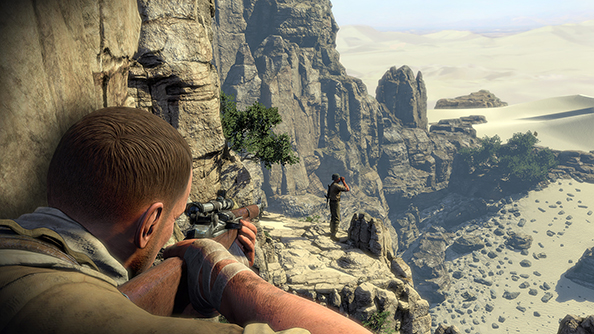 The openness of maps in turn gives way to a series of objectives that guide you from settlement to base to motor pool to stronghold, some of which are stealthy in nature, others of which will require you to use your rifle to take out key targets, human or mechanical. Helping you out in this endeavour is the new improved sound masking system, which allows you to cover the sound of your shots by timing them with ambient noise-makers in the environment. An anti-air gun pounding out a shot every ten seconds might be a problem for your allied friends in the sky, but it will render you inaudible to the enemy AI whose heads you’re exploding.

Under normal conditions however, that enemy AI will react to the sounds of gunfire and set out to investigate the source of the bang. To this end, Sniper Elite 3 introduces a new relocation mechanic: you’re given an on-screen notice once soldiers begin hunting for you and so must exfiltrate to a new location before they can track you down. The AI will do this whenever they spot dead bodies, or when their friends’ brains keep coming out whenever there’s an otherwise unremarkable loud noise, and their unwavering and reliable habit of honing in on your last known location means you can set traps by laying mines or tripwire. 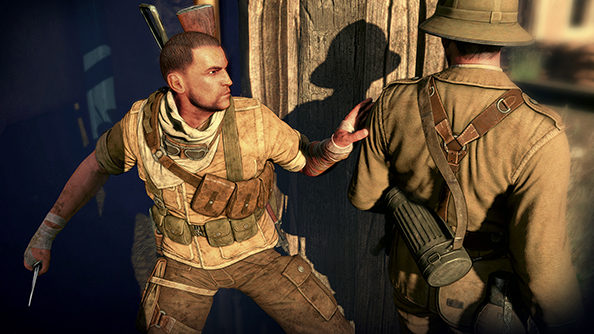 There are more of them too, Rebellion are boasting over 30 AI-driven soldiers per level, as well as commanders and ranked troops who lead squads and exert their cleverness over all under their command. The idea, ultimately, is that you’re pitted against a dynamic army of intelligent and vocal actors, one that you can remain completely invisible to or, once your presence has been recognised by them, outwit using traps and by moving along hidden routes around the map. As well as increasing the amount of clever flesh per level, Rebellion have bolstered the vehicle roster to include a wider range of real world tanks and jeeps and machinery. The ability to shoot through a man’s skeleton and guts has been transposed to the engine parts of these cars and tanks, so you can now shoot individual parts of a machine in order to sabotage or destroy it in unique ways.

Multiple routes towards objectives lead naturally to multiple means of completing those objectives. Upon discovering a fuel depot beneath an AA gun you’ve been ordered to destroy, you can either take a long-range shot at nearby ammo dump to detonate it, or get in close, craft a fuse from your inventory and wire the whole thing to explode, like a little snipey MacGyver. Taking the sniper’s shot might appeal to purists, and for those players Rebellion have added proper, specialised sniper nests that overlook huge swathes of the level, but otherwise there appears to be an increased focus in dirty-handed, up close sabotage. A range of stealthy hand to hand attacks facilitates this alternative style of sniper play. 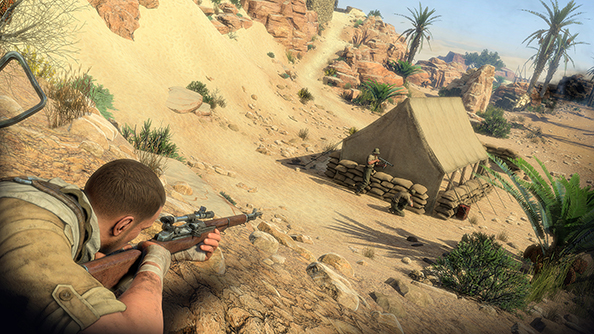 Multiplayer and co-op has been developed side-by-side with the single player campaign this time around, which Rebellion say will lead to a far better online experience than that of Sniper Elite v2. The entire campaign can be played through in co-op, while an Overwatch mode splits two players into complementary Sniper and Operative roles, the former being the typical shoot-a-man job, the latter being a more hands-on, sabotage-y expert. There’ll be a Survival mode too, in which the Afrika Corps will dutifully send wave after wave of troops your way. as well as five more competitive modes. That’s loads of modes, and simply fantastic news for modes fans.

Sniper Elite 3’s more than just an update to the insides of Nazis then, it promises to be a rethink of everything between their skin and the edge of the map too. It’s out in “Q2 2014”, which I think is sometime between April and June, and will be available on most kinds of computers that there are these days. Perhaps it will even be available on, nngngnkgh, CD-Rommel. Pffptpptpth.