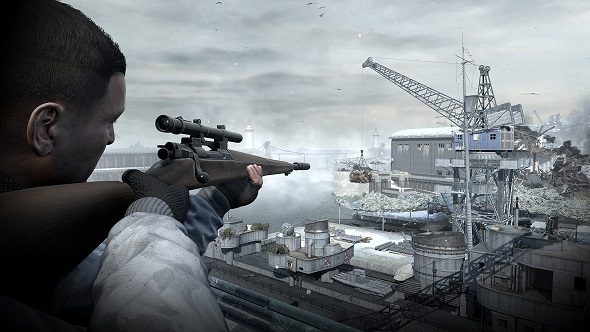 Continuing their support for Nazi testicle shooter Sniper Elite 4, Rebellion have revealed details on its upcoming Deathstorm mini-campaign, alongside the new Elimination multiplayer mode. Set after the events of Sniper Elite 4’s main campaign, this three-part expansion has Karl Fairburne sneaking into a Nazi naval base to retrieve plans for a mysterious package, codenamed Deathstorm.

Keep it down, but here are some great PC sniper games.

The first part of the Deathstorm campaign, titled Inception, will have agent Fairburne sneaking around a German destroyer, making his way through legions of Kriegsmarine soldiers to collect a package integral to the success of the Manhattan Project. Inception will be release on March 21, with the other two parts coming soon.

March 21 also sees the arrival of the Night Fighter expansion, which comes with three new weapons, night-time camo for eight weapons and a myriad of new male and female character skins. It’s not just premium content however, as a new game mode and multiplayer map will be available for free as well next Tuesday.

Elimination is a 12 player game mode, where players are partnered up in teams of two to take down all other snipers. If you die, you’re taken out of the game and made a spectator but if your teammate manages to kill an enemy, you’re back in the fight. You’ll be able to play this new game mode on a brand new map called Night Woods, adding quite the ambience to your sniping.

If you want to keep track of Rebellion’s roadmap for future Sniper Elite 4 content releases, you can check out their official website for more. Under current estimations, Deathstorm part 2 is set to release in late April, with the final part coming out either the end of May or the beginning of June.