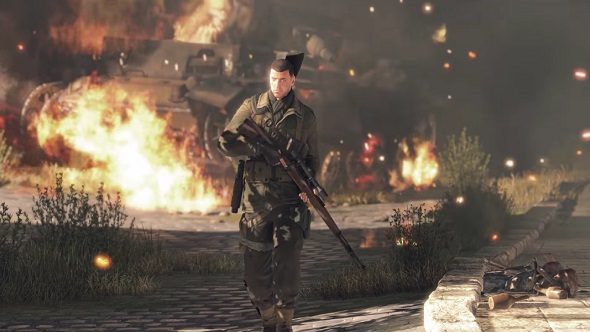 When you’re working as a sniper, timing is indeed everything. You’ve got to plan your escape route, set up some traps and line up the perfect shot so you hit that Nazi officer right between the eyes as his vehicle convoy explodes around him. In this launch trailer for Sniper Elite 4, Rebellion show off just show important timing can be when executing an operation.

Infiltrate more hideouts with these other PC stealth games.

Set in sunny Italy during 1943, Sniper Elite 4 has agent Karl Fairburne of the Office of Strategic Services not just punching fascists, but shooting, stabbing and blowing them up, as players help the Italian resistance overthrow its oppressors. As missions can have Fairburne clearing out seaside villages, destroying vehicle detatchments, infiltrating outposts controlled by the fascist occupation, players will have to adapt to various situations and make sure their timing is just right.

If you are definitely spending Valentine’s Day with Karl on his trip round Italy, you will probably be interested to hear more about Sniper Elite 4’s season pass. As with Sniper Elite 2 and 3, this season pass comes with the classic “Target: Führer” mission, which gives players plenty of ways to kill the monorchidistic dictator. Most snipers will go for the nutshot straight away but Rebellion promise “30 different ways” to kill Hitler so get creative.

The season pass promises three new campaign missions and content expansion packs, additional weapons, over eight weapon skins and five extra characters to use in multiplayer. Any new maps that Rebellion release for multiplayer will be free for everyone, so don’t worry about buying the season pass if you just want access to the multiplayer maps.

Sniper Elite 4’s season pass goes for $34.99/£29.99 and is available to purchase at launch. Get cleaning your scopes and checking your ammo, as Sniper Elite 4 releases next Tuesday, February 14.