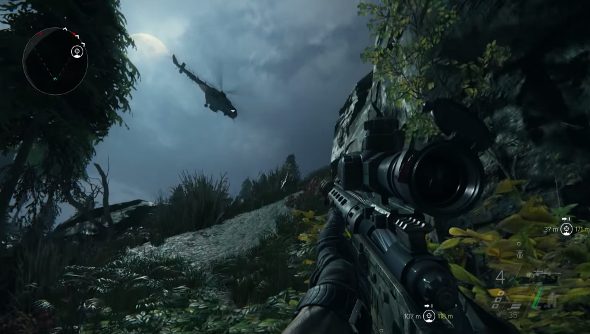 Sniper Ghost Warrior 3 looks like it’s going full dumb ’80s action movie, though without any self-awareness whatsoever. It’s the Expendables without the humour, instead opting for blowing chunks out of people with high-powered rounds.

If shooting is your thing, check out our list of the best FPS games on PC.

Your little brother, who wants to be just like his older, more murderous sibling, has been stolen by the bad guys. One of them was wearing a balaclava, so they’re probably extra bad. Either way, you’re off to shoot them until their heads explode, in the name of finding your bro.

“Having been raised on a ranch at the foot of the Colorado Rockies, Jon and his younger brother, Robert, were always best friends and also their own greatest rivals. Their family always considered military service the highest form of patriotism, so it was no surprise that both of them enlisted as soon as they were able to.

“But while Jon has been shaped into a resolutely “follow the book” type of Marine, Robert quickly rose through the ranks of the US Navy–despite using sometimes using unorthodox methods–and became more rebellious and sceptical of authority along the way. Robert deeply loves his older brother, but also believes that an old-school way of thinking in warfare will inevitably leave Jon behind.

“The question that remains is who captured Jon’s brother, Robert, and did he want to be captured?”

Personally, I think the question that remains is: who cares? Let’s not pretend a game about shooting people from really far away is about anything more than just that.

Sniper Elite 4 did it right recently. In that, you are an army dude during the war, doing army dude things. It was also WW2, so of course there are thousands of soldiers to shoot directly in the nuts.

Anyway, you can watch the new trailer for Sniper Ghost Warrior 3 above. It’s out on April 25.