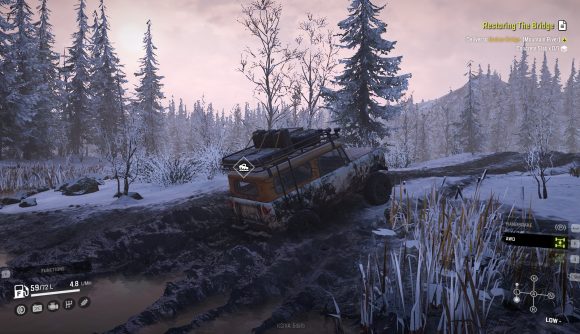 SnowRunner is in many ways a high-fidelity simulation of driving off-road trucks, but it does make a couple concessions to the fact that it’s still a videogame. One of these is its instant winch, which is available at the touch of a button – tap Y on the controller, for instance, and you’ll be connected to the nearest winch point to help you pull your rig out of a particularly tricky spot of mud.

In real life, of course, you’d have to get out of the truck, grab the cable spooled around your winch, and pull that to the point you wanted to use as an anchor. Then you’d go back to your truck and activate the winch. Fortunately, none of this is necessary in SnowRunner, and players have been showing off their quickdraw winch saves on the game’s subreddit.

Since the game’s winch can be activated instantaneously, it’s possible to use it while your truck is moving – specifically, while your over-loaded rig is in the middle of rolling over off the side of a mountain trail, for instance.

User kylekucz has a typical example: while heading up around a forest trail, the maintenance module on the back of the truck starts to sway, and is about to pitch the whole vehicle over and down an embankment. Kylekucz thinks quick and hits the quick winch button, which shoots the cable out to a sapling growing in a rock formation on the opposite side of the road. The rig is saved.

Don’t know if this counts but another quickest winch in the west! from snowrunner

Highway trucks have a lot of power, but as you might expect, they aren’t optimally designed for back roads, especially when you’re hauling a big shipping container in a trailer. Redditor rrToxic discovered that while taking some drilling equipment to the port: letting the semi’s wheels stray just a bit off the dirt road, the truck’s entire load pitches over to the left, breaking the tie-downs. Quick winch button to the rescue!

Good ole quickest winch in the west moment from snowrunner

Finally, Redditor Gracefulfondle ran into a situation in the Zimnegorsk map in Taymyr while hauling a similar load. Traveling down a muddy trail, Graceful encountered a flooded creek that had washed out a wood bridge. Not wanting to attempt a crossing, Graceful consults the map and opts to back the load up to take another route, but the trailer has its own ideas of where to go. Trouble develops as it runs into a bank on the side of the road, but that magic winch saves the day once again.

Ben had a great time with SnowRunner and gave it a 9/10 in our SnowRunner review. It’s available now on the Epic Games store.