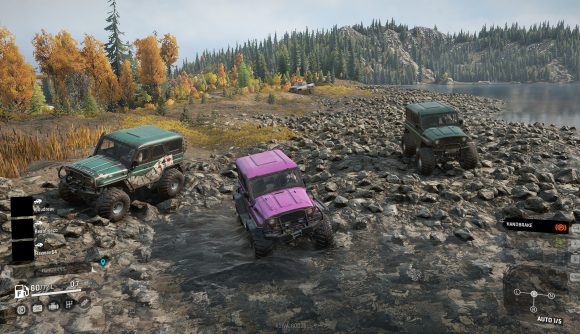 SnowRunner is out, and it’s terrific – but there have been some technical problems on PC, especially in co-op. A new SnowRunner patch is here to address some very specific issues, and they cover just about every big issue we’ve had with the game, from trouble getting multiplayer sessions going to vehicles falling through the ground.

The new hotfix ensures that your friends list will properly appear when you launch the game – though you might still have issues if you’re coming to the main menu from another session. You’ll also be able to properly receive co-op invites when you’re in a different multiplayer game, and there are some general connection improvements, too.

It also addresses a collision bug that made trucks fall through the ground, and with that, pretty much every issue we had in our own multiplayer sessions ahead of Ben’s SnowRunner review are now fixed. It was a lovely time even with the issues, and will certainly be an even better time without them.

The patch notes on the official forums also detail some more situational fixes. Logitech G29 users will still have force feedback after alt-tabbing, the UI glitches in the garage when you skip the tutorial are fixed, marker problems for the Lost Container mission are fixed, and a selection of “mod, gameplay, and localization issues” have also been addressed.

Last night, @iamthemanta, @dkbailey64, and @iboudreau went on an adventure together in @PlaySnowRunner, and rounded off the trip with a pleasant swim. Ah, memories… pic.twitter.com/2vylV5tiKS

Check out more simulation games for the thrill of digitally recreating things you can do in the real world – personally, I vastly prefer the thrill of getting a truck stuck in the mud during a videogame.