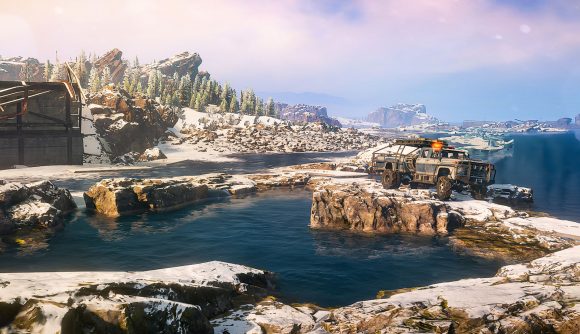 Some screenshots and information have been released for the upcoming new update coming to survival trucking game SnowRunner. The images reveal the beautiful, icy terrain you’ll be up against for Season 1: Search & Destroy, when the content rolls out on in a few days.

A post on the official forums of publisher Focus Home Interactive revealed some details on the first of two areas coming as part of Season 1. Lake Kovd is part of the Russian Kola Peninsula, and it’s described as “a frigid, beautiful landscape of mountains, frozen lakes, and desolate Soviet era facilities”. It’ll have a different atmosphere to Alaska, including the aurora borealis shimmering overhead.

Within the four-kilometer-squared region, there’s old Soviet bunkers and military sites, and not much else in the way of human comfort beyond a few watchtowers, and the single garage. Some assistance is provided, however, by the Prototype Exploration Unit, a play-controlled drone of sorts that can do some scouting. You’ll likely need it, as falling through the ice is now a legitimate danger in the simulation game. Two new vehicles are being added, TUZ 16 ‘Actaeon’ and the Ford 750 4×4 Crewcab, as well as more skins and customizable features.

We loved SnowRunner when we reviewed it, our Ben Maxwell saying that the sequel to 2017’s Spintires: MudRunner “represents an astonishing realisation of Saber’s vision” – and he was far from alone in that assertion.

While these official updates are coming as part of the season pass, SnowRunner fans have been enhancing the experience with custom radio stations, and some lightly competitive speed-winching. SnowRunner Season 1 will be available July 15, and you can pick up the game, and its season pass, at the official site.