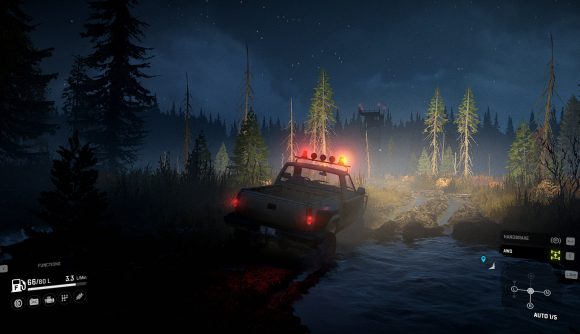 For all their sun-soaked natural beauty, SnowRunner’s big outdoor maps are a bit lonely – you don’t see other people, and there aren’t even any animals to be seen. At least, that’s what we thought until we started browsing the SnowRunner subreddit, where players say they’ve seen eyes looking back at them when they stare into the Alaskan woods at night.

Some screengrabs posted to r/SnowRunner seem to show the the shape of a wolf or wild dog, with two eyes reflecting the headlights from players’ big trucks. It’s at night, and the outline of the creature is difficult to make out, but it seems distinctly dog shaped.

The wolves or wild dogs apparently appear in Michigan and Alaska, and are only visible for a moment or two after you round a turn at night before they disappear into the impenetrable darkness of the treeline. But you’ll almost certainly see them, or at least the eerie green light reflecting off their retinas. While the days in SnowRunner are idyllic if muddy, nights can get downright creepy – especially if you haven’t added any upgrades to your truck’s lighting system.

One commenter says they saw three of the creatures next to the road while driving up a hill, while others have chimed in just to express gratitude for letting them know they aren’t crazy for thinking they’ve seen the wolves in their games, too.

It’s not clear – at least from the available screenshots – that these creatures are wolves, it’s worth mentioning. They could be something else, something more sinister – SnowRunner’s own cryptid species. Perhaps they have something to do with the flood that’s wreaked havoc on the various areas in the game. Or maybe they’re just another bit of detail in an already lovely sim. Either way, I’m going to go looking for them when I get through working this weekend.