It is very pretty. With just four days left to go in the so far concept art fuelled Torment: Tides of Numenera Kickstarter, InXile have revealed what their single player hardcore RPG sequel will actually look like in action. The shot in question shows an area of the game called the Bloom, a sort of dimension-spanning tumour with shops inside. A bit like a Westfields but stuck in between universes and made of the undying flesh of creatures beyond the kin of mortal men.

Here’s a closer upper of it, which you can click to embiggen to a size larger than our website is currently willing to show you. 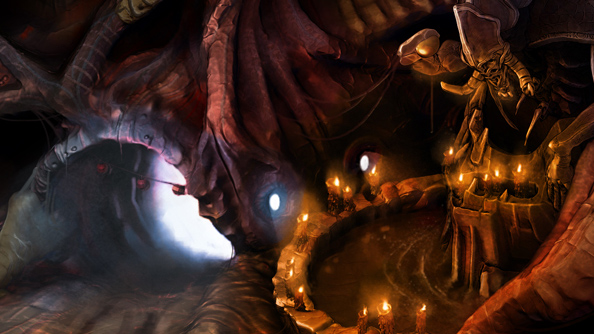 InXile’s single player hardcore RPG sequel broke Kickstarter records shortly after beginning its crowdfunding campaign, founder and industry veteran Brian Fargo proudly informed me. Torment: Tides of Numenera smashed the $1 million funding barrier more quickly than any other Kickstarter campaign before it had done, and then very briefly held that title until the Veronica Mars campaign swiped it. Veronica Mars, I have since discovered, is a television show about a crime-solving teenager? You really can’t predict these things.

Of the screenshot, and its late appearance in the Kickstarter campaign, Fargo had this to say: “When we do a Kickstarter, we put down a number that we need to be able to deliver a product against, we need to assume that we can make a game for the minumum that comes in. In order to this sort of pre-rendered – people like to call it 2D versus 3D, I like to call it pre-renderered versus rendered on the fly – it requires artists to go in by hand and to touch up these screens and to do paint overs, so it’s a different kind of more expensive process.”

InXile had to be sure they first had the dough to fund such an art-intensive style. “I didn’t know for sure if we were going to achieve these kinds of numbers,” admitted Fargo. “We had a lot of assets we had to work on to launch Kickstarter, from concept pieces and so forth, so this didn’t quite get number one priority because we weren’t certain if we were going to be able to do it. Now we’ve been working on it for the last three weeks and here’s what you got. So that’s why it came later in the campaign, but we were okay with that knowing it was a possibility. We didn’t want to show it up front and not be able to deliver on it.”

If you’re interested, you can read my full interview with Brian Fargo later this week once team PCGN have returned from their chocolate abusing Easter holidays. Brian and I discuss Kickstarting, Tormenting, Wastelanding and incontinence.

Previously, Torment: Tides of Tumarooma made headlines by creating what might be the world’s first human stretch goal, a goal Fargo is so confident they’ll hit that he’s already started setting up Chris’s desk.