Solasta: Crown of the Magister starts where any good Dungeons & Dragons campaign should: with four folks coming together over some cheap ale to discuss a proposition, one which promises to launch them on a grand quest. Banter forges a bond between them while also recounting the harrowing mishaps that befell them on their way to the tavern. It also serves as a bit of tutorial, teaching the player how to navigate menus, sneak past enemies, and use clever combat manoeuvres to even uncertain odds.

For players familiar with fifth edition D&D, this will serve as a light refresher. But for those who’ve never rolled a set of oddly shaped acrylic dice, the barrage of pop-ups introducing new buttons and concepts might be overwhelming. Experienced players and newbies alike may find that even though they’re reading a lot of instructions, some relatively basic things remain unexplained.

The requirements for dual-wielding or the nuances of reactions come to mind. You can search for such things in the game’s reference guide, which is literally just a rulebook resembling the D&D Player’s Handbook. It’s a dependable, if inelegant, way to fill the gaps in the tutorial.

After your trope-y mysterious benefactor gives you your first task – to search a nearby camp for survivors of a possible attack – you’re given leave to explore the main town of Caer Cyflen. It’s a disappointingly barren place that feels like no one really operates there unless they’re trying to sell you something or are related to the plot in some way.

More like this: The best fantasy games on PC

There are faction NPCs that will gladly pay you in gold and reputation for books you find on your travels, but there isn’t much reason to choose one over any other at this stage of the game. 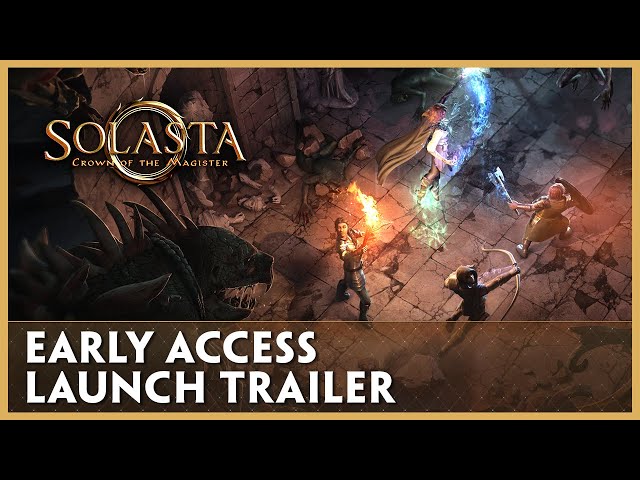 Solasta is in Early Access, of course, and allowances must be made. Hopefully this sort of thing will be fleshed out. But the blandness of Caer Cyflen is a microcosm of something that bodes ill for Solasta as a whole: D&D’s open game licence allows game designers to use 5e’s rules, but not its settings. So, while Larian’s Baldur’s Gate 3 takes place in D&D’s Forgotten Realms, the world Solasta presents is completely original.

When it comes to straightening out stats and classes, Solasta could give Baldur's Gate 3 a run for its money

And yet, it is not: it feels like a super generic fantasy world, complete with reliable tropes like elves and orcs and whatnot. Even the slight twist developer Tactical Adventures puts on it – a sort of reverse-Witcher backstory in which a great cataclysm drops humans into a world full of magic and monsters – has yet to reveal a plot hook that feels fresh in this space. Of course, there is plenty of room to grow into something unique. But in the 15+ hours I’ve spent with it, it all felt run-of-the-mill.

Some of the other world-building elements are hit and miss. Cosmetic character creation options in particular are limited and frankly pretty ugly – especially when considering the competition that had the internet thirsty for devil men in early October. But when it comes to straightening out stats and classes, and selecting personality traits and demeanours, Solasta could give Baldur’s Gate 3 a run for its money. 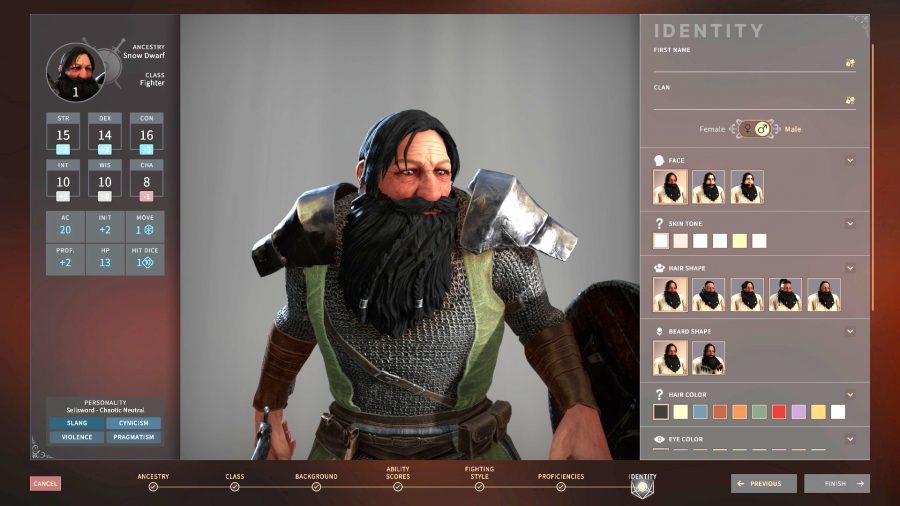 You assign your standard D&D alignments, like chaotic good or neutral evil, but you also give your characters traits based on these alignments. These traits act like guardrails to steer your characters through conversation: characters that use slang might turn off more noble-leaning NPCs. Almost all of the conversation between your party and other NPCs is fully and competently voice acted, yet done without any input or direction from you.

On rare occasions you’ll be required to make a dialogue choice, which is tied to both a party member and, potentially, a skill check. Some of your traits affect what appears here. If your character is more inclined to violence, like my dwarf fighter, then his signature move in scenarios like this will be to try to intimidate people. 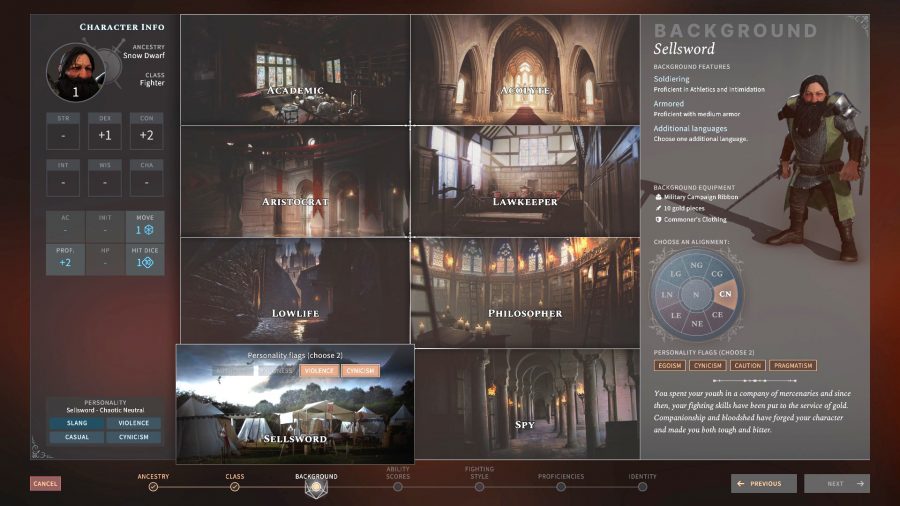 It’s pretty good fun to just wind up a bunch of characters and watch them go like clockwork toys. Since you choose your starting party at the beginning, and can potentially create every member (or choose from a short list of pre-gen characters), you could create a wildly mismatched group of personalities just to see how they’ll navigate certain situations. It’s interesting to see how different groups, maybe one without a healing cleric or anyone capable of reading magic, would figure out a given puzzle.

All this automation comes at a cost, however, which you’ve probably already guessed. And yes, I do wish there were more options to role-play more actively. A multiplayer option would also really set Solasta apart: Considering how air-tight its mechanical translation of 5e’s ruleset is, this would be a brilliant platform in which to host a digital tabletop session or two. Its clean UI shows nearly all the necessary information all the time, and you even get a bunch of customisable dice that really roll on-screen for every check, attack, and damage calculation. It’s the closest a videogame has got to being D&D without engaging with real people.

The combat scenarios in Solasta are where the most clever and devious world design happens. Most dungeons are actually dark, and require your party to consider how they plan on seeing through it. Some races do so naturally, but those that can’t will need a light source. Ignore this at your peril, because enemies who aren’t illuminated will have you at a disadvantage. And yet, carry a torch in your hands at your peril, too, because enemies get bonuses to hit against you when you’re lit up. 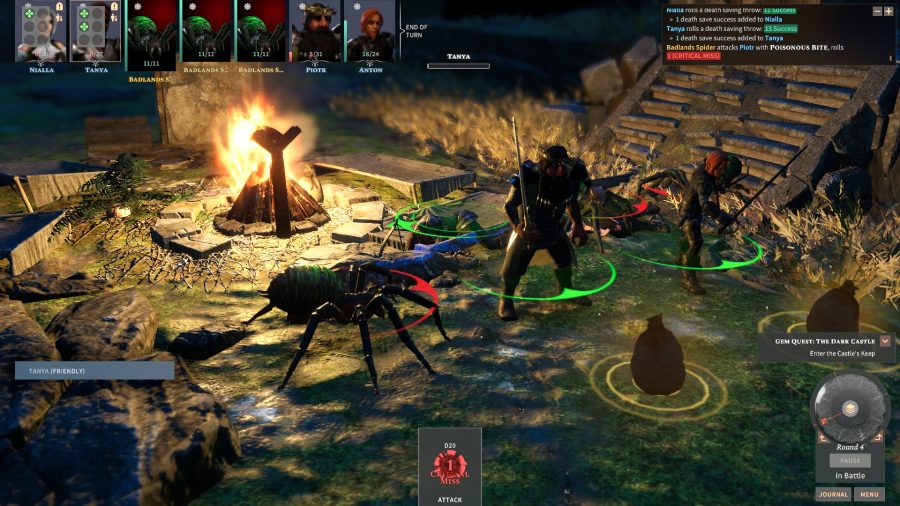 Some of the best dungeon layouts use terrain and elevation to really test your party’s gumption. Almost immediately, you’ll find yourself having to jump over gaps to get to enemies, at the risk of them shoving you off the ledge you just traversed. Many enemies can fly, or climb up the walls, finding weird ways to get you by thinking outside the box as you defend against them. There’s plenty of skulking in hallways and brawling with standard fighter types, but the more off-the-wall (pun intended) encounters are the most memorable, and leave me most excited to see more.

Related: Why not check out our guide to Baldur’s Gate 3 races

If you’re clamouring for a Dungeons & Dragons adaptation that’s as faithful as it can be to the dice-throwing of its source material, Solasta is worth checking out. But if an enrapturing world and story are more your priority, I don’t think it’s ready for you yet. Waiting out this first wave of Early Access updates – at least – would be wise.

Solasta: Crown of the Magister was released into Early Access on October 20th, 2020. At the time of writing, they are aiming to release fully in around six months, sometime in 2021.