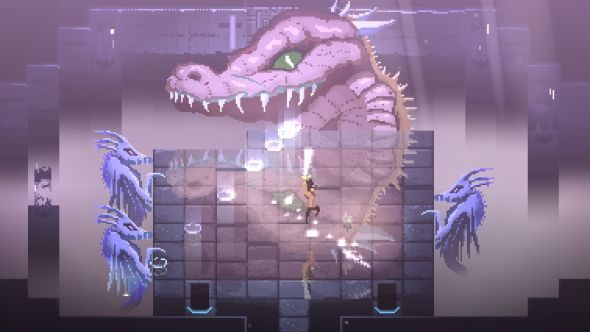 Defying all expectations, Songbringer is a sci-fi-fantasy adventure set a long time ago in this very galaxy. Announced today as coming from Wizard Fu, a development studio of just one man, it’s Zelda with a pixellated art-style, laser swords, space parties and ancient evils come to devour the galaxy. Trailer above, details below.

For more of what’s on the way this year, check our list of upcoming PC games.

Set in 13,000 BC (obviously), you play Roq, a man who just wanted to cruise the galaxy in his “art party ship” having a nice time. Then he frees a dark army of monsters, starts an intergalactic war and needs to save everyone and everything from, y’know destruction.

Helping you out, both in terms of story and an optional co-op partner, is robotic sidekick Jib. Everybody needs one. You’ll be adventuring through a procedurally generated overworld, ten dungeons and a lot of enemies. Story events are the same each time, but locations and layout will vary as much as your CPU can make them. It’s generated from a six-letter code, so sharing a particularly fun run is possible, as well as 308 million possible combinations.

A slightly wacky sense of humour runs through the whole thing, with a weapon list that includes “the epic and humming nanosword, the boomerang-like top hat, the ghost sword projectile, and plenty of bombs” and Jib’s love of mustaches. It’s hitting PC and all the cool consoles some time in summer, and if you’re headed to PAX East will be playable on the show floor.

Be more info over on Steam, if you’re after it.