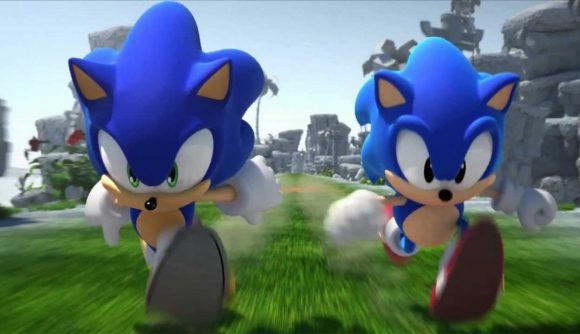 If you’ve never checked out Sonic Generations, you’ll be hard pushed to find a better opportunity than right now, as the platform game‘s on sale on Steam for $1/€1/75p. The discount is part of the annual Steam summer sale, where you can find great deals across the entire store.

Sonic Generations isn’t your typical 3D Sonic adventure. The game was developed to coincide with Sonic’s 20th anniversary, celebrating two decades of the blue blur. The levels feature a selection from throughout his storied history, going right back to Green Hill Zone from the first Sonic the Hedgehog. The gameplay is meat-and-potatoes Sonic, with more side-scrolling and whizzing around loop-de-loops than any other gimmicks.

There is a loose time-bending plot involving the modern Sonic and Tails meeting their early nineties counter-parts, but you can just ignore the details and enjoy the nostalgia trip of seeing some of your favorite areas all bright and sleek looking, not to mention playing as short, chubby OG Sonic while you’re at it.

A number of other entries in the sonic franchise are on sale, too, including Sonic Mania, the remix of the first three Sonic games that essentially revitalised the whole series. Sonic Adventure 2 and both Sonic and Sega All-Stars Racing games have had their prices slashed, but none as drastically as Sonic Generations.

If you’re looking for what else to pick up in the current Steam sale besides a Sonic romp, we have lists on the best action-adventure games, best zombie games, best FPS games, and best Star Wars games that are full of great suggestions.