Sony has patented a VR motion controller with the USPTO, suggesting the popular PSVR accessory might be in line to receive a next-gen makeover sometime in the PlayStation 5’s lifetime. The design of Sony’s crude patent might appear somewhat familiar to PC VR enthusiasts, too. It operates per finger tracking – just like the Valve Index Controller.

Valve’s ‘Skeletal Input’ VR system tracks a users fingers individually, without any glove or hardware located on the finger itself. It’s a nifty feature, and one that lends itself well to immersive experiences and intricate hand movements in-game. Perhaps that’s why Sony’s prospective controller, spotted by 91mobiles (via UploadVR (and Nibellion), comes with familiar finger functionality.

Sony’s system appears to be a little more rudimentary than Valve’s, however. Not all that surprising considering the first-gen PSVR’s budget price tag vs. the Valve Index’s $1,000 down payment. Nevertheless, it’s easy to decipher how it would likely work. While the patent doesn’t specify whether the sensor would be electrostatic or infrared, our best guess would have it measure occlusion for each finger across the front of the device, thus measuring the extension, to some degree, between fully extended and gripping the controller.

Like Valve’s design, Sony has also seen fit to attach a strap towards the rear of the controller to ensure you don’t go dropping/throwing your device. Remember when everyone kept throwing Wii Remotes at TVs? Those were the days. Best avoid that, hey Sony. 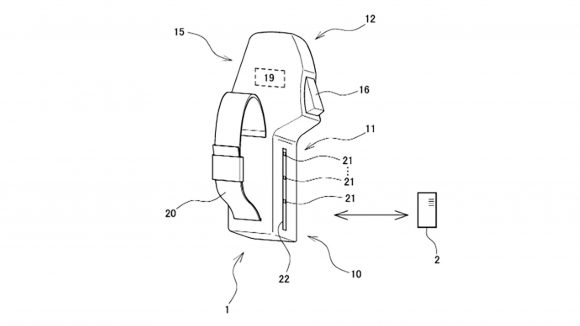 Also located on the controller appears to be a thumbstick, a few bonus buttons, and a trigger beneath the index finger. Whether that finger will feature the same sensor tracking we can’t say. We can’t even confirm whether this device, or any part of it, will ever make it into the final Sony PSVR revamp – or that there even will be a PSVR revamp.

The patent over on WIPO is dated way back in 2018, and Sony’s plans will likely have changed plenty since that time.

Rejuvenating PSVR does make a lot of sense, however. Xbox boss Phil Spencer has confirmed that VR isn’t a big consideration for Microsoft’s next-gen console, the Xbox Series X, nor its siblings, which leaves the door open to an uncontested USP for Sony. PSVR is also a hugely successful venture for Sony and PlayStation. While far from quality of PC VR kit, PSVR often tops the VR headset sales charts – no doubt thanks to its affordable price tag.

Sony’s intentions in VR are yet to be confirmed. But what has been confirmed is Half-Life: Alyx’s release date. How’s that for a non-sequitur? Whether PSVR 2 is already in the works or not, your only point of entry for Valve’s highly-anticipated prequel is with one of the best VR headsets for PC. You best get moving, it’s only a little over a month away.