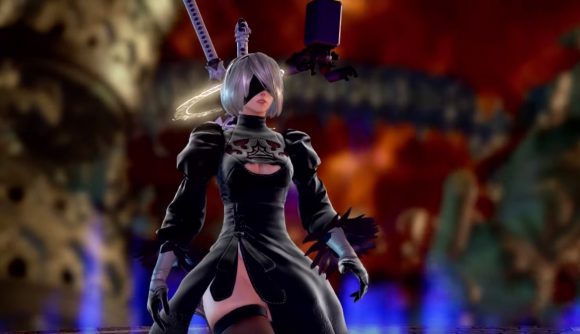 Everyone’s talking about Soulcalibur VI’s new custom character creator, but the series has always had a thing for guest characters. Now, YoRHa soldier 2B is joining the fray.

Bandai Namco announced 2B as an upcoming guest character for Soulcalibur VI at Paris Games Week today. She’s a natural fit for Soulcalibur with her signature swords, Virtuous Contract and Virtuous treaty, plus her suite of flashy special moves.

2B will also bring with her a new stage, and judging from the trailer (below) it’s the top of an ancient building from the City Ruins area of Nier: Automata. Naturally, her pod support system is coming along as well, and she’ll have her own background music and an alternate costume.

Lore-wise, it’s hard to get your head around an android from a contemplative and melancholy game like Nier: Automata showing up in a fighting game that’s mostly about a demonically-possessed sword, but Soulcalibur VI is just continuing the series’ tradition of including guest characters from alternate dimensions and storylines. After all, Geralt of Rivia is already on the current roster, and Kratos and Yoda have both appeared in previous entries.

Here’s the trailer for 2B:


In the video description, we’re informed that 2B’s mission is to “eliminate the hostile entity known as Soul Edge,” which is the evil sword that serves as the Soulcalibur series’ main antagonist.

Sure it’s weird, but no weirder than the many strange and wonderful fighters we’ve seen players cook up in Soulcalibur VI’s character creator.

Bandai Namco hasn’t announced a specific date for when 2B will show up in the game – the company just says she’s “coming soon!” When she does, we’ll finally be able to settle the long-running argument over who would win in a fight: 2B or Geralt.