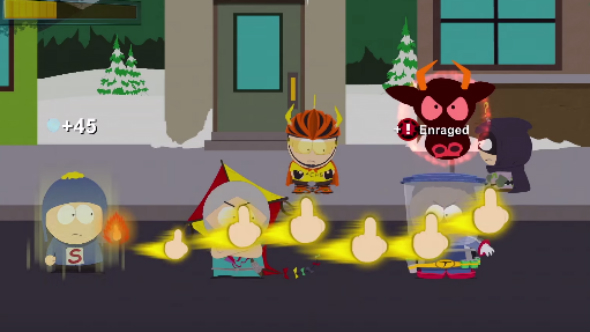 And that’s not a problem, because there’s plenty of superhero intrigue, mocking and typical South Park humour in its place. The brief spells of gameplay that we could spot in the trailer shed some light on the game’s reworked fighting system, where players are able to navigate each scene in 2.5D, occupying tiles a la turn-based strategy games.

For more tactics and scheming, try our list of the best PC strategy games.

While small-scale fights seem to be no different than those of The Stick of Truth, the trailer does feature a larger battle with multiple clashes occurring simultaneously across three 2D planes on South Park’s main street. That is until a passing driver yells at the kids, telling them to get out the damn street.

We also get a glimpse at some of the costumes we’ll be able to put together as well as the other kids’ superpowers – like Timmy’s ability to vanish into thin air. It all looks like a slight expansion on the original game, which is great, because all we really want is a sequel that’s as funny and ridiculous as the first game was.