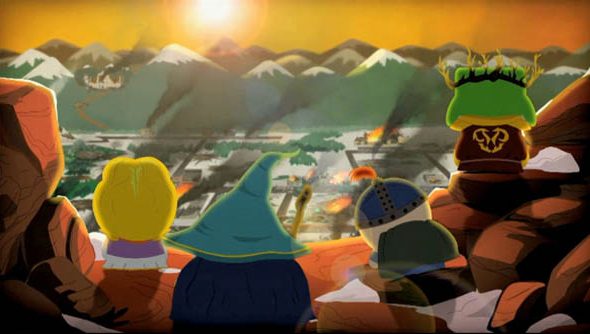 Don’t you just hate it that trailers aren’t usually accompanied by cheering, whooping crowds who laugh at the the slightest prompt and generally make a kerfuffle throughout the footage? Luckily for us, what with yesterday being the VGAs we are now able to see all the latest trailers with an audience track free of charge.

Check out the new South Park trailer below.

The trailer kicks in at around 4.45. Though if you’re a fan of Samuel L. Jackson saying quotes from his most famous films with references to gaming thrown in and are able to do so without retching then, by all means, watch from the beginning:

I’m torn. Ish. I can’t tell whether all the footage was in-game cutscenes or how the game will actually play, which I think is a good thing, South Park is one of the few gaming tie-ins that could look spot on with the source material. Plus, it sounds just like an average episode of the show.

On the other, it’s not the average episodes of the show I want it to be like. South PArk’s average episodes are a string of crass shit and sex jokes. Its exceptional episodes are some of the best satire currently being made. Though part of their strength is their prescience and timeliness, can this game hit the mark when it has to go through such a long development period?

Thanks for the trailer Polygon.