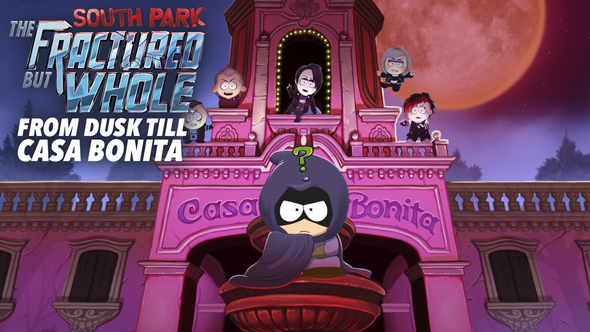 The South Park RPG, The Fractured But Whole, is getting a new DLC that takes its lead from From Dusk Till Dawn – the Quentin Tarantino-written vampire movie.

A tweet from the South Park account revealed From Dusk Till Casa Bonita will be coming out on March 20:

Team up with The Coon and Mysterion to defeat a demonic presence at Casa Bonita in the new DLC From Dusk Till Casa Bonita, coming March 20! pic.twitter.com/zW99KkFcoK

Once again you’ll don your cowl and join up with The Coon and Mysterion, this time to fight off a demonic presence at the Mexican-themed restaurant. If you watch the series you’ll know Casa Bonita is Cartman’s favourite place in all the world, so expect him… sorry, The Coon to give his all in defending it from evil.

Though, evil in this case appears to be the goth kids.

Being a spin on From Dusk Till Dawn, I’ve my fingers crossed Ubisoft will be revealing their own take on the film’s crotch gun: