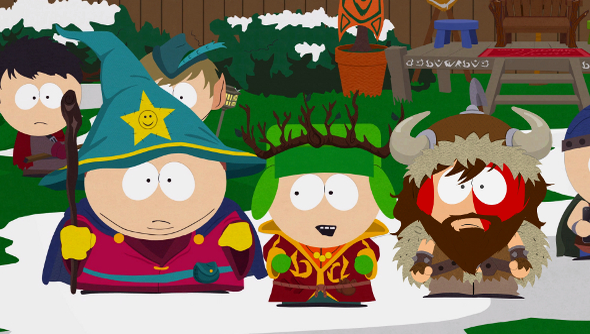 I get a lot of mileage out of RPGs when it comes to anecdotes. There was the time when I teamed up with a mammoth and a giant to take down a dragon in Skyrim, that delightfully evil moment where I made a wookie murder his best friend in Knights of the Old Republic, and my steamy romance with Iron Bull in Dragon Age: Inquisition. But none of those compare to a JRPG-style battle, on a bed, against some gnomes, while the giant floppy balls of my character’s father threaten to knock me to the ground. Thanks, South Park.

Honestly, that should have been my review. Giant floppy testicles. 10/10. 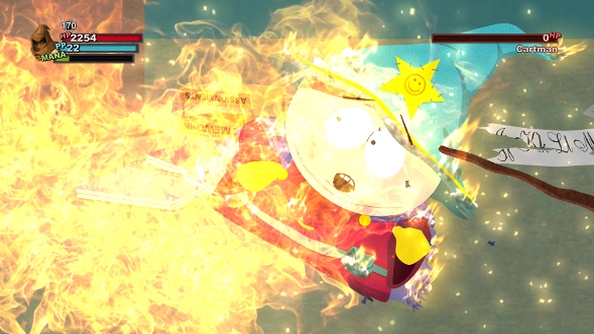 What could have been a simple TV tie-in ended up being a brilliant homage to 16 years of South Park, all wrapped up in an RPG that never dips below great. The grotesque gags sit comfortably with cutting satire, just as they do in the best episodes of the show, and fits in Nazi zombie fetuses, anal-obsessed aliens and a LARP war between bloodthirsty children.

It’s the best episode of South Park that I’ve seen in years.

The irreverence belies surprising depth. The turn-based battle system is simple, employing timed button prompts and a few unique abilities, but there’s strategy in there too. A rogue, for example, can cause an enemy to bleed from a backstab, doing damage over time. If that becomes the core of your attack rotation, then you can hunt down bits and pieces that augment gear, increasing the length of time the target bleeds for, how much damage the attack does, and how much the bleeding itself hurts the enemy. 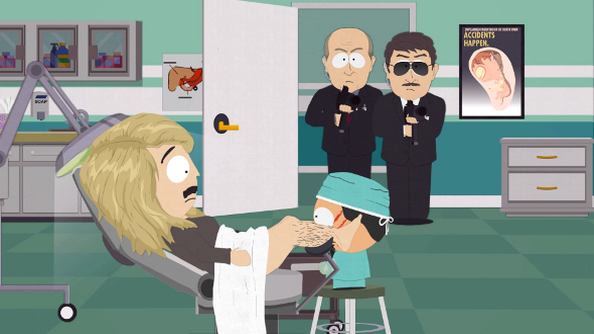 Finding all of these weaponised sex toys and manly Viking facial hair requires quite a bit of exploration. The town of South Park is a Tardis, with a fairly small overworld and then some chunky dungeons like South Park Elementary or the Abortion Clinic. The real treat is Canada, though, which has been transformed into an 8-bit fantasy land filled with dire bears, objectively the best kind of bear.

Going by my choice last year, Saints Row IV, and now this year, clearly what I want is more games that make my impressive belly wobble with laughter. There are too many po-faced games that take themselves seriously when they are really incredibly silly. Call of Duty needs more slapstick. Assassin’s Creed needs more visual gags. But South Park: The Stick of Truth is perfect the way it is.