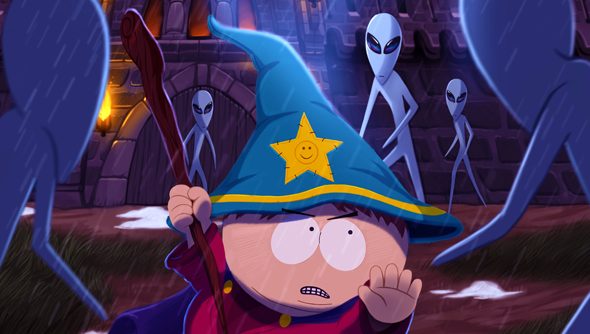 South Park: The Stick of Truth might have been stuffed full of jokes at the expense of RPGs and gaming in general, but Stone and Parker aren’t done with the medium yet. The latest episode to air in the US settled on a nice, big target: freemium games.

Without wishing to spoil too much, Stone and Parker have invented a Canadian Department Of Mobile Gaming – set up to fill the country’s coffers with cash gleaned from gullible gamers’ credit cards.

The usual cast are caught up in the phenomenon too. See the preview clip, taken from Randy’s lecture to Stan and his grandpa about the dangers of addiction.

“It’s what everybody’s doing,” claim the CDMG. “Freemium games are what’s now – and it’s all just a load of harmless fun.”

Of course, that turns out not to be entirely the case. And given that you’re somebody who reads about PC games on a dedicated website, this is probably not one of those South Park episodes that turns your view of a subject on its head.

For instance, it’s possibly not the revelation it’s presented as that only a small percentage of players ever pay anything in free-to-play games – or that some developers might be guilty of exploiting those few for maximum profit.

But there are some nice quotes to be had out of this. Chief among them, “It has to be just barely fun!”

What are the free-to-play anomalies in your catalogue? The games you’ve enjoyed in spite (or because of) the model?