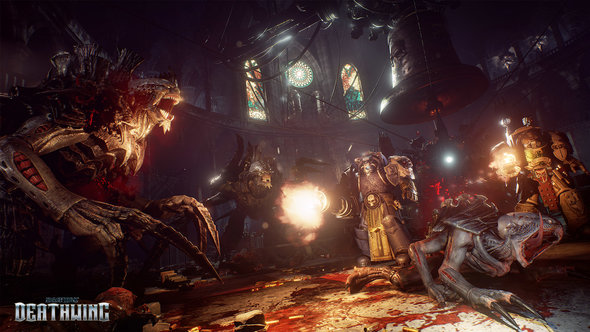 French outfit Streum on Studio’s attempt at the classic Warhammer 40k board game, Space Hulk, received a fairly lacklustre reception when it was released back in December. But it would seem the French studio are not abandoning us to drift through wormholes, as is evidenced by a huge patch which brings a whole host of sorely needed fixes, as well as a few gameplay improvements.

For non-space-related marine experiences, check out our list of the best FPS games on PC.

Faster load times, enhanced AI and improved performance are the headliners for a game which was heavily criticised for being clunky and buggy on release. Players will now all load into maps at the same time, greatly improving the loading time for multiplayer matches and the issues which have plagued certain AMD graphics cards have been eradicated. Outside of the standard stuff, you can now toast some Greenstealers with the heavy flamer and the hellfire’s explosive rounds. This is bolstered by an expanded loadout, allowing players to choose from a wider arsenal when bringing the pain in multiplayer.

“Our first priority after the release was to fix the most urgent technical issues” said a representative on the game’s Steam community page. “That’s why the main changes of this patch are technical fixes – we updated the graphical engine and rebuilt all the levels.”

The full patch notes are available on the Steam community page. Space Hulk: Deathwing is currently on sale on Steam for a mere $26.79.