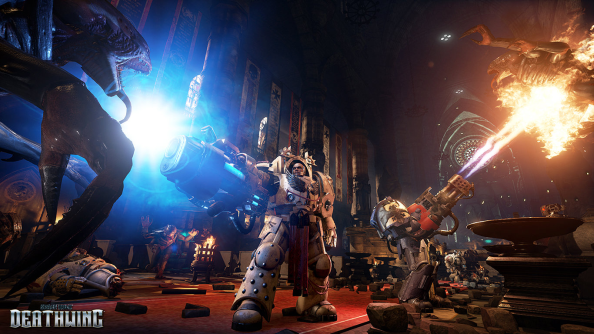 If there’s a type of game symbolic of publisher license abuse, it’s the FPS remake of the strategy classic. It’s Syndicate, with the qualifying ‘(2012)’ parentheses. It’s the shooter that wound up apologetically calling itself The Bureau, demoting its ‘XCOM’ designation to the subtitle.

What happens, though, if an FPS takes its strategy subject matter seriously? If it interprets the source material with the religious fervour of, say, an Imperium librarian?

Like to be swarmed? These are the best zombie games on our lovely platform of choice.

Space Hulk, the board game, hasn’t changed very much at all since 1989. It drops a small squad of bulky Space Marine Terminators into the chrome corridors of a dead ship riddled with Tyranid Genestealers – Warhammer-universe xenomorphs who cannot be stopped, only delayed. It’s about plugging the dam as long as you can, knowing that it will burst, and making cruel sacrifices on behalf of your Marines when it does.

Space Hulk: Deathwing, the FPS, is about the very same things.

“We’ve tried to instill this feeling through how the Genestealers swarm your squad, and the oppression this creates for the players,” says Christophe Longuepée, owner and co-founder of Streum On Studio.

“You’ll constantly feel as if you’re moments from death and failure. Some missions push this feeling to extreme levels. You’ll feel as though you and your companions will never be able to survive the filthy xenos, as they crash down like a relentless tsunami.”

In preserving the tension and tactics of Space Hulk, Streum On have built a highly unusual shooter: one in which effectively managing your squad and anticipating enemy behaviour is essential. The French developers, best known for the madly ambitious E.Y.E: Divine Cybermancy, describe Deathwing’s combat in musical terms like tempo and momentum. 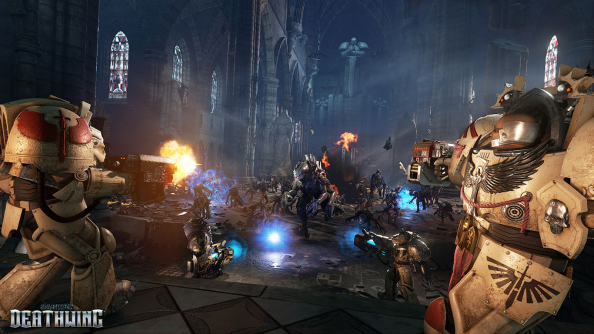 A dedicated AI sets the rhythm with the aim of keeping you on edge. True to tabletop tradition, Genestealers generally prefer to hold back and amass a large group before rushing forward, reaching for your Terminators with as many claws as possible (with a standard six limbs each, that’s a lot of claws).

“We wanted to avoid creating dumb enemies that just run towards you and blindly attack,” Longuepée expands. “We’ve designed them to be capable of working as a team, waiting for each other or flanking players. Sometimes they’ll even set up ambushes. The Unreal Engine 4 Blueprints were very useful, as it allowed us to prototype and rapidly test our different ideas in that regard.”

You, in turn, can influence where the beats land by sealing off parts of the environment, cutting off the stealers’ approach with a few firmly shut doors.

The titular space hulks are katamari balls made up of 40K vessels, all hollowed out and mashed together in the warp. They’ve provided Streum On with endless opportunities for oddball environmental design – particularly where the cathedral-like Imperium ships are concerned. Some of the team are into urban exploration, and drew from industrial buildings and places of worship in equal measure. 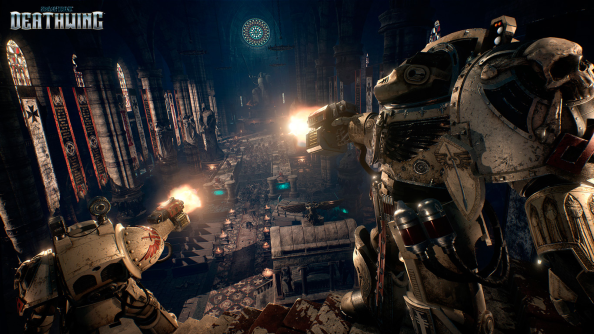 “You’ll get to visit vast gothic constructions, industrial mazes, dark technical galleries, war barges,” says Longuepée. “We’ve worked and experimented with this a lot, and had a great deal of fun doing so.”

As a librarian, you’re a conduit for the mysticism that seeps between the shoulderpads of the human Imperium, with access to psy powers and “foreknowledge” – though Streum On won’t yet reveal how that manifests itself. You’ll also direct a squad of AI companions in initiating fights, scanning for threats, diving for cover and healing each other, as well as the all-important closing of doors.

“The main challenge when creating a good squad command system is always to let the player have full control while preventing their teammates from doing all the work or hindering their play,” Longuepée divulges. “We wanted to avoid a slow interface that would have left players frustrated.”

As unusual a shooter as Deathwing is, it has precedent. Its AI squadmates, door control and swarm management will ring a bell for anybody who played the Space Hulk FPS series EA released in the ‘90s. Streum On’s shooter is a faithful tribute to the board game, but it also harks back to the oppressive horror of those formative first-person shooters. 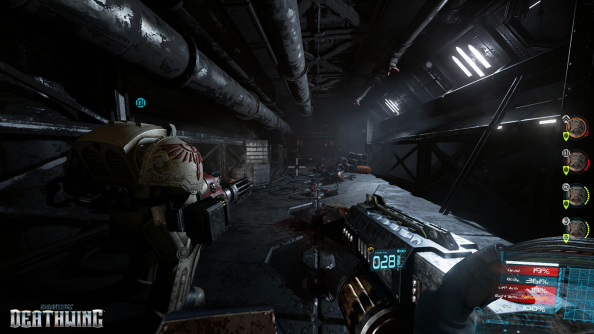 “We’ve worked hard to give it our own touch, our own terrifying signature,” says Longuepée. “There are many things that we’re proud of, but I think most important is we created a cool, violent, nerve-wracking shooter that respects the Warhammer 40,000 universe. It is a dream come true for most of us, and we hope it will be held in the same regard as the classic ‘90s FPS.”

Space Hulk: Deathwing is due out later this year. Unreal Engine 4 development is now free.

In this sponsored series, we’re looking at how game developers are taking advantage of Unreal Engine 4 to create a new generation of PC games. With thanks to Epic Games and Streum On Studio.