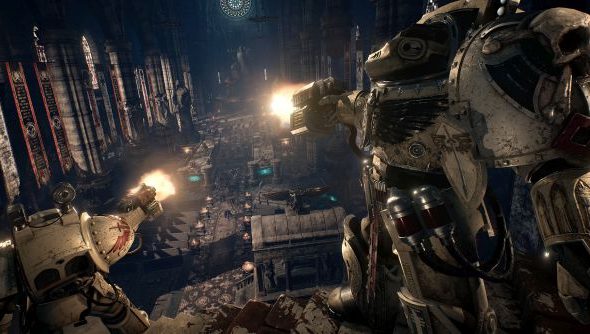 Prepare to explore the fusion of gothic spaceship and asteroids making up the titular Space Hulks in Warhammer 40K FPS Space Hulk: Deathwing as the game enters a pre-order beta next week before December’s release.

For more great FPS games on PC, read on.

By pre-ordering the game (with a 15% discount) you can get a taster for the full campaign on November 20 with the tutorial and first mission available to play solo or with three friends in co-op, three weeks before December 9 when Deathwing arrives for everyone else.

A new trailer should help you see if it’s something you’re willing to drop £25.49/$33.99 on for an early shot, with details of why you’re digging into these massive hunks of rock and steel to face Genestealers and all sorts.

There’s also a little look at the weapon uprade systems to make your Storm Bolter even more deadly and other choices you can make for your squad’s Terminator Armour.

Pre-ordering also nets you the Lost Mace of Corswain to use against the hordes of enemies inside the Space Hulk Olethros, which is a higgled mess of Black Templar ships, troop transports and some pirate vessels, too.