Space Hulk: Deathwing is the third game inspired by the Warhammer 40,000 spin-off in as many years, but unlike the Full Control adaptations, Streum On’s Deathwing transforms the turn-based tactic game into a first-person action romp where you command a small squad of Space Marine Terminators.

It’s a close-quarters, savage brawl between three genetically augmented supersoldiers and a seemingly endless horde of monstrous Genestealers – sharp of claw, fleet of foot – inside gargantuan, gothic ships, drifting dead in space. And though the perspective might have shifted, the spirit of the tabletop game appears to be mostly intact.

Spurred on by visions, a Librarian – one of the Space Marine’s psychic warriors – and his two Space Marine chums explore a series of ruined warships, the titular space hulks, that have been twisted and smashed together by the Warp. Players step into the massive boots of the aforementioned psychic, but his pair of buddies can be issued basic commands as they stomp around the wrecks, shooting the Tyranid Genestealers with bolters and cannons or smashing them with powerfists and chainswords. 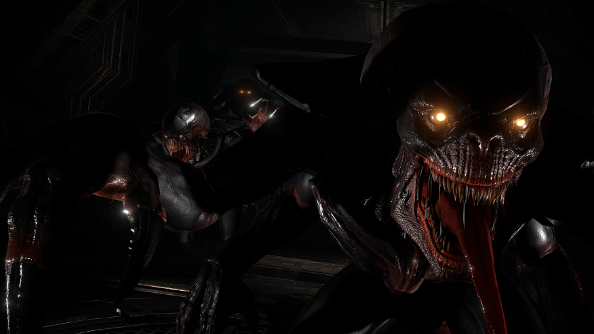 So you, as the Librarian, can tell your squadmates – a heavy weapons fella and a healer – to move to specific areas, hold their ground, do their own thing, focus on specific targets – which is important when dealing with tougher adversaries like the hulking Broodlords – and mess around with doors.

Ah yes, doors! They’re a bit important, actually. You’ll need to, destroy, unlock or hack some of them to progress through the giant wrecks, but they’re also a handy way to get some breathing room when you’re being chased by a flood of alien monsters.

One of the Streum On developers offered some advice for dealing with such floods, particularly when playing on the hardcore mode. It’s all about keeping up the momentum and tempo, he explained. You stay on the move, gather up all the Genestealers that you can without engaging them in melee, and then you bolt through a door and lock it. Not only does this offer precious seconds, up to a minute, where you’re not being attacked, but you’re forcing the Genestealers to come from one small entrance, making them easier to manage. 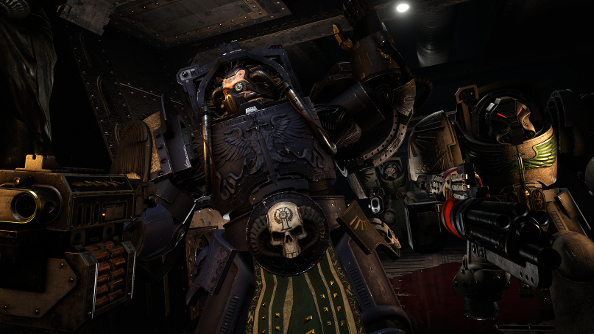 Though momentum is important, like the tabletop game the pace is still slow and methodical. Space Marines aren’t sprinters, not in that armour. While the Terminators will be kept busy holding back the tide of Genestealers, the missions are investigative in nature. The huge relics are mysteries waiting to be cracked open and explored. But yes, there’s still a lot of fighting.

Battles are mostly brutal melee fights, with the Genestealers quickly closing the gap between them and the Space Marines. They come from everywhere, too, pouring out of vents, doorways, balconies and wherever you’re not looking. When they get up close, that’s when they start trying to tear every human they can see to pieces.

How one deals with these enemies depends on their loadout, and the loadout of their allies. Everything from simple bolters to holy maces can be equipped, as well as the extremely helpful flamethrower. Gear’s not purely offensive, either. For instance, you may want to wade into battle with a mighty shield protecting your front. Nothing can get through that, the developers promise. You’ve got a job to do, though: get through the mass of Genestealers. And you can’t do that if you’re cowering behind a giant wall of steel. Thankfully, the shield can be used to create opportunities, by pushing Genestealers back, giving you an opening to crush them with your stalwart hammer or maybe the deadly Mace of Absolution. 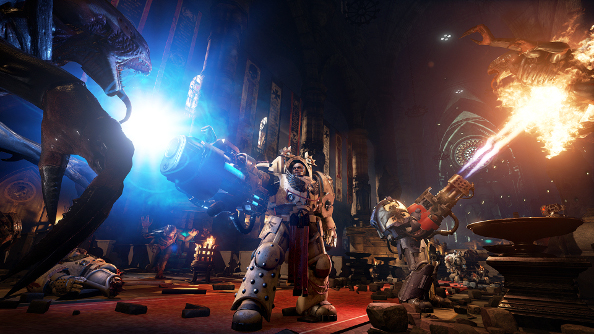 While the game is mostly finished – 90% complete, say the developers – the demo was hands-off, so I was lamentably unable to get a feel for the combat. It looks like you’d maybe expect when a group of blokes who are essentially cosplaying as tanks fight monsters, though. Attacks look like they have weight, and are appropriately clunky, reminding us that the Space Marines are encased in massive suits of armour.

Melee might be the focus, but it pays to have some ranged weapons and skills – unlocked or purchased using skill points gained based on mission performance – to deal with the ship’s automated defenses and things like Hybrid Genestealers, a mix of Tyranid and human that can wield guns.

The basic Genestealers are quite fragile, and use numbers to overwhelm. It’s all relative, though. An ordinary soldier with a big gun is going to get slaughtered in seconds, but a Space Marine is a one-man army, and can deal with individual aliens with ease. So the Genestealers are sneaky: they’ll try to attack from all directions, retreating when it gets too hot in the kitchen, and then regrouping and attacking again when they’re at full strength.

Even if they do manage to take out a Space Marine, however, that squad member isn’t down for good. When they are down, it’s because their armour has been too badly damaged for them to move about, so it needs to be repaired. Genestealers can’t really kill these tough Terminators. So you can bring your allies back from the brink, or even teleport to an outpost where an Adeptus Mechanicus is standing by to work his mechanical magic. Doing that – fleeing – will reduce the skill points you get at the end of the mission, however. 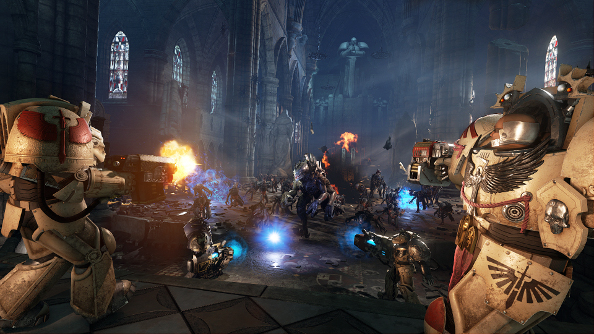 Speaking of missions, there are nine levels split across seven different derelict ships. Each ship comes from the Imperium, but represents a specific faction and thus looks dramatically different from the next. There’s an Adeptus Mechanicus ship, which is full of ancient tech and a huge, cavernous engine room complete with gargantuan cogs and gears. And then there’s the Black Templar ship, a grimdark, gothic flying Cathedral that is more recognisably Space Marine-y.

If you manage to work your way through all seven vessels without failing, then you’ll probably be at it for around 10 hours, but there’s also a co-op campaign that mixes things up considerably. Not only does that mean that you and a chum can take direct control of the other squad members, Streum On is also chucking in some extra classes to play around with as well. It’s an interesting departure from the tabletop game and previous PC adaptation, which pitted players against each other as Genestealer and Space Marine.

Obviously Deathwing is a much looser adaptation of the source material than Full Control’s uneven attempt to bring the tabletop game to digital life, but its ingredients still feel familiar. The horror of being stuck in a floating graveyard, hounded by blood-thirsty monsters; the claustrophobic corridors filled with antediluvian technology and gothic architecture; the manipulation of the environment through the blocking of passageways – these elements are all drawn from Games Workshop’s 40K spin-off. In Deathwing, though, you’re seeing it all through a Librarian’s eyes.