Much of Warhammer 40,000’s lore is written from the perspective of the Imperium of Man, and thus the capabilities of its Space Marines are often a little exaggerated. While their ceramite plasteel armour is hardy and their genetically-enhanced bodies are capable of absorbing several more bullets than your average soldier, a Space Marine is not an indestructible force. This is a fact you’ll quickly learn in Space Hulk: Tactics, a game in which even the Imperium’s most veteran Terminators can be torn to pieces by a single Genestealer.

If you’ve played the original Games Workshop tabletop game, or any of the six videogame adaptations, you’ll already know much of what Space Hulk: Tactics is built around. Commanding a team of five Terminators, you slowly explore a derelict space wreck by moving down grid-based corridors. These narrow pathways are only as wide as a single man, meaning someone always has to venture ahead first. And, like the first person to slide through the jagged gap into a haunted house, your pointman is inevitably the first one to fall prey to the salivating jaws of the xenos threat.

Every turn is opportunity for disaster. Blips appear on the map as if it were a motion tracker in Aliens, identifying possible areas of movement, so you’re able to prepare for the incoming storm. But the Genestealer AI is infuriatingly tenacious: set up an ambush and they’ll refuse to advance, forcing you to make a move that could have disastrous consequences.

There are ways to regain the upper hand, though, and this comes in the form of the most notable change Tactics makes to the original tabletop rules: a deck of cards. Upon each turn, you’ll have three cards to choose from, all of which will buff your Terminators in significant ways. For example, you may be able to play a card that guarantees a Terminator will strike a hard-hitting blow when they next engage in melee. With that in hand, you just bait a Genestealer into combat, and can then can crush its skull and advance to the next section of the ship. 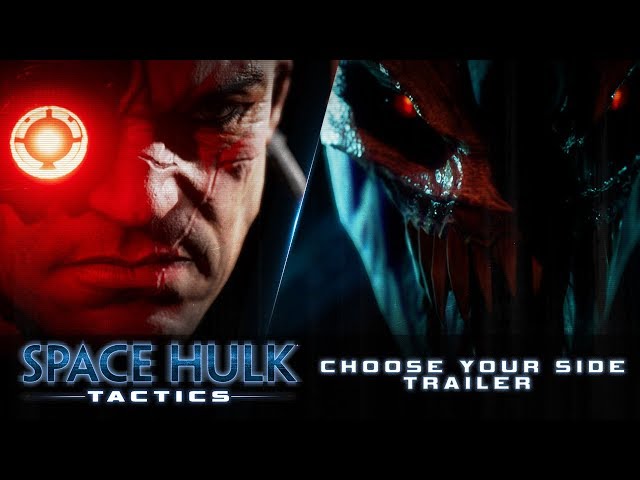 But sometimes a buff won’t save your life, and that’s where card recycling comes in handy. Every single action you perform in Space Hulk: Tactics – from firing a gun to turning 45 degrees on the spot – costs action points. You burn through AP exceptionally quickly, but you can gain a few more actions by recycling your cards. The more impressive the card, the higher quantity of action points you’ll receive. This can really help revitalise a turn in which your decisions haven’t quite been strong enough to secure a better position – just three extra AP could move a Terminator around a corner and engage overwatch over a long, Genestealer-infested corridor, holding them at bay until the next turn.

Even with a system that offers such flexibility, though, Space Hulk: Tactics is punishing and, at times, arduous. Its plodding pace and inhuman enemy strength means that mistakes can bring hour-long missions to a close in just a few seconds, leading to a sense of deflation. But it’s also a game that strictly adheres to its own rules and logic. It can be outwitted, but the learning curve is bound to be long and unrelenting. If you relished the kind of logical challenge that XCOM presented, back when it was considered brutal and unrelenting, then you may find Space Hulk: Tactics a battle worth fighting.