Space Hulk is a game about holding back the flood. You stick your chunky marine fingers in the dam, knowing full well that it’s doomed to burst all over your mega-armoured face. The only question mark is over whether you can achieve your goals before that happens.

Five terminators have been left unconscious, either through uncharacteristic inefficiency from the genestealers or after a boozy night on the cold tiles of the Sin of Damnation. My goal is to revive at least three of them by guiding the psychic librarian Calistarius and his lone escort, Brother Claudio, through the cramped corridors of the hulk. Calistarius must then leave the level via a specific exit point with at least two terminators in tow.

The hive mind will do everything in its considerable wrenching power to stop me. And today, the hive’s mind is that of our Jules. 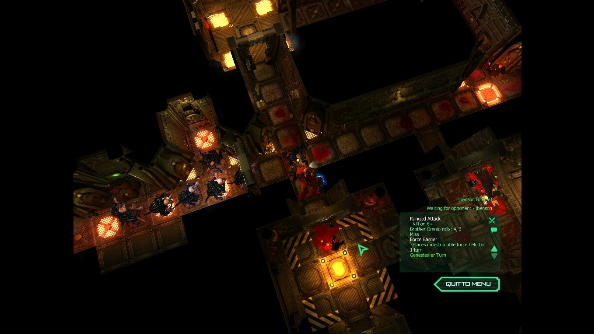 Bracing against the flood

The map is a web of corridors – just the sort of place an organised squad of terminators could close down without exposing their vulnerable backs to the monsters. Conversely, it has many, many entry points Jules could use against me.

At present, though, it’s conspicuously quiet. The first noise comes from Claudio, who plunges his lightning claws through an uncooperative nearby door and saves us a long trek around to the location of the nearest terminator.

Calistarius’ survival is critical, but there’s not enough manpower to pull rank: at the first intersection, the pair split up to quicken the work. The librarian heads south, tromping inexorably in the direction of the bulk of the unconscious marines – each nestled in their own quadrant of a block of rooms. Claudio goes north, just as the first blips appear on the map.

I’ve sent Claudio after the outlier – one Brother Zael. Zael, I know, carries the flamethrower. In a playground line-up of unconscious space commandos, he’s the first pick for my team. 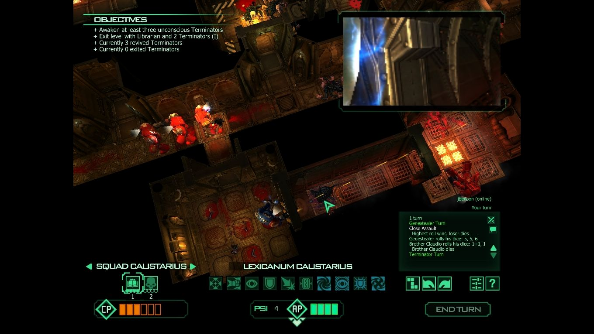 But Space Hulk is a slavish adaptation of a board game that likes its dice rolls, and intention doesn’t always mean execution. While Calistarius successfully brings around the marine in the first quadrant, Claudio’s claws scrape ineffectually off an unpowered door, and Zael’s kip continues for another turn. That’s a problem: for every turn that passes, the hive’s forces get stronger and my marines are more likely to be surrounded.

The librarian buys a little time by blocking off the genestealer’s easiest access point to the sleeping terminators with a force barrier – a sort of psychic plug which leaves a tile inaccessible for one turn.

Bracing against the bugs

Blips are groups of one-to-three genestealers that move around the board ambiguously as a single piece. They offer the element of surprise – but Jules will want to volunteer their exact number before an assault. Because if the terminators spot a blip first, the exposed xenos are temporarily unable to attack. 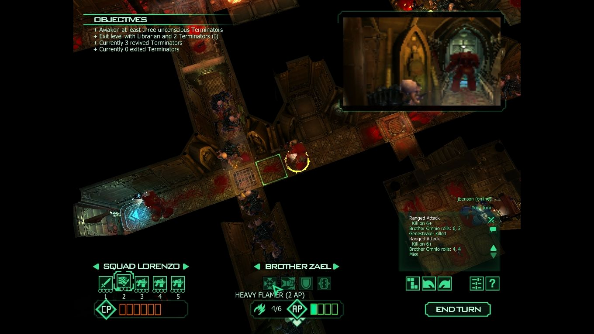 Jules takes an early loss during his first reveal. His attempt to deploy three genestealers on neighbouring spaces is hampered by a doorway, leaving one monster unplaceable. The game won’t let him cancel the move, however, and so the genestealer dissipates as potential energy. One down, I reason.

“It’s so easy to spend action points which you didn’t confirm, and that’s your turn messed up,” bemoans the hive mind. I make noncommittal noises of sympathy, little knowing how those words will come to sum up my own situation later.

I begin my next turn with a misclick that sends the newly-awakened Brother Gorial not into the next room to revive his Brother, but clomping into the doorway of a corridor lower down the screen. With a sigh, I send Calistarius after him – stopping only to erect a force barrier along the map’s starting corridor, where genestealers are now starting to amass. I’m nervous: while the librarian heads further south, Claudius is stuck in the north. Thankfully, a distant boom indicates that his claws have finished off that stubborn door, and Brother ‘Flaming’ Zael has joined the squad. 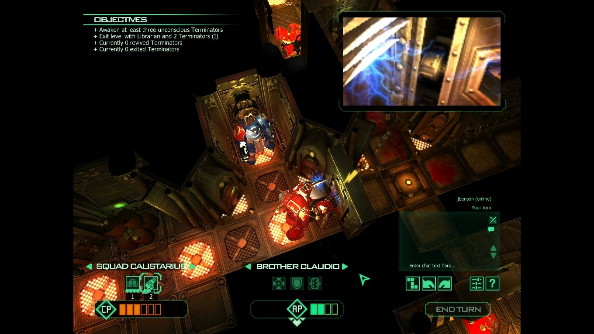 Zael has awoken to a much less pleasant dream. Last turn’s psychic barrier has had the unintended effect of funnelling half of the xenos down towards our intended exit in the south-west – while the rest circle Claudio and Zael hungrily in the north. I resolve to pull the two distant terminators back into the power-armoured embrace of the main force as a matter of urgency.

Embracing the calculating coldness of the Imperial leadership, I also decide to cut the two outlying sleeping beauties loose. There’s one unconscious marine resting along the path to the exit, and he’ll be enough to meet the requisite three.

Brother Gorial makes use of his accidental position to step out into the corridor and lay down a light shower of bolter fire over the xenos making their way in from the east. He doesn’t hit any of them, but the message is clear – every step Jules takes towards the librarian will have to be won with blood. 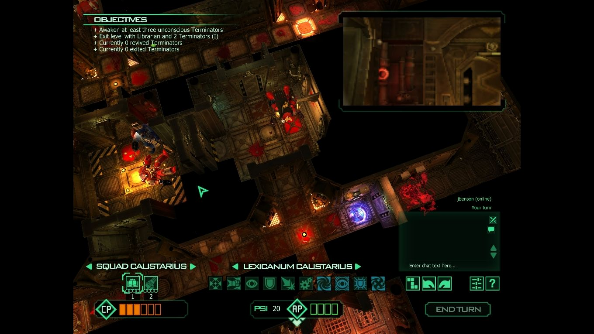 Flamer-carrying Zael, meanwhile, makes his careful way south – flanked every square of the way by Claudius with the Claws. It’s a typical Space Hulk manoeuvre: I need to control the space for as long as I can, covering every possible angle with limited forces as I push onward to the objective.

“Clear a path,” booms Zael as he takes up a temporary position facing west, against the horde. “Don’t clear a path,” pleads the hive mind.

The genestealers’ six movement points don’t quite put them within scratching range of Zael, but they’re in easy reach of his flamer. Jules secretes one alien in an alcove, but the flames curl around the corner to find it, cleansing the corridor. I then speed Zael south as quickly as his shonky animation will allow, expending all of the command points I’ve been saving for a special occasion. A genestealer I hadn’t spotted comes in from stage right to stop him, and a sluggish network connection builds the tension – but a groan from the hive mind lets me know that Zael has triumphed in close combat, despite the dice.

Further down the map, Calistarius reaches the last unconscious marine within our grasp – relying on Brother Gorial’s cover behind and force barriers to keep the route clear ahead. But I can see I’ve already taken too long about this. Jules’ gooey goons aren’t finite – they’re allocated turn-by-turn. And behind the barrier, a translucent sea of blips awaits the marines. 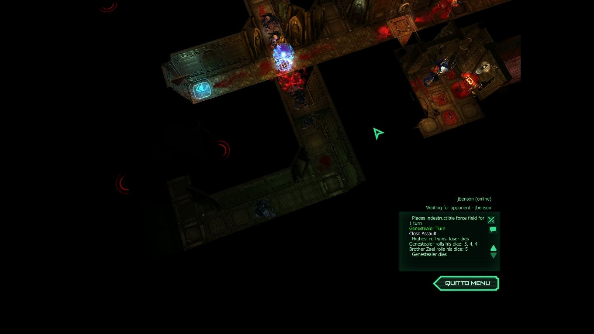 There is a terrible order sometimes uttered by commanders in the Imperium of Man. An Exterminatus calls for the total eradication of life on a planet via orbital bombardment – and there’s something of it in my next, desperate move.

I call in a psychic storm, and purple light consumes the junction nearest to the map exit. Three of Jules’ monsters drop dead. Calistarius has evidently spent a lot of time hanging out in the ‘Warp Theory’ section of his library.

The spell leaves a previously unblocked tile open, however. Anticipating a swarm from the exit point, I task Calistarius with fortifying the room he now occupies with the last awakened marine – a Brother Omnio. Praying that’s he’s named for his all-seeing ability, I put him into overwatch alongside another new squaddie, Goriel. As in XCOM, overwatch readies your soldiers to fire if an enemy enters their line of sight – though in the spirit of Games Workshop, it’s subject to jamming weaponry. 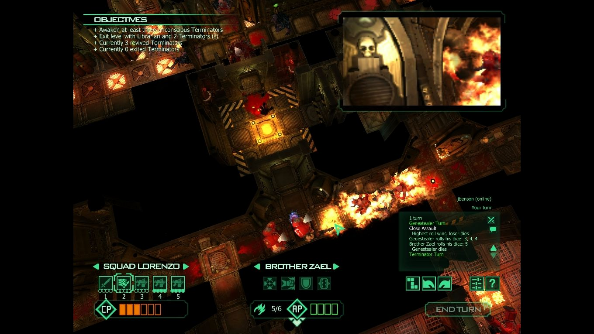 Space Hulk has several single player campaigns, played against alien AI. But when the hive’s mind is human, as it is in the board game, it behaves a little differently. The AI, for instance, doesn’t camp. It doesn’t leave your squad to stew just around the corner while its numbers bulk up at the rear. Jules, by contrast, has filled the corridors around the exit point with xenos I can’t quite get a shot at.

Brother Zael catches up with the main force in the south, and celebrates by toasting a trio of genestealers. Behind him, Claudius with the Claws defends the main route in from the north. Jules now has monsters in the corridors to the north, east and west – and my librarian is still holed up with Omnio in a room to the south.

I’ve put Claudius into guard mode, which will allow him to re-roll the results of close combat if they turn up unfavourable. That’s crucial: even with the claws adding +1 to Claudio’s roll, I’m acutely aware that the genestealers are able to roll three dice and pick the highest result. One altercation ends in two breathless draws before Claudio’s scissorhands finally connect with sticky xenos torso.

After a couple of turns in the scrum, however, Claudio with the Claws, ‘Doorbane’, goes down. He will be missed – especially as our northern flank is now open. 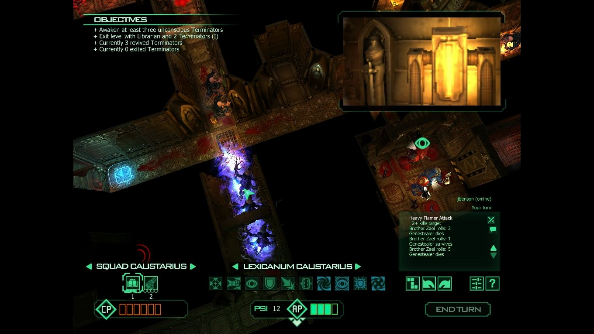 Calistarius nukes the genestealers near the exit once more with another psychic storm, and two fail their save rolls. But it’s not a permanent solution: the swarm keeps growing, and the librarian’s pool of psi points is running dry. I devise a last-ditch plan. I’ll keep the xenos at bay with a psychic barrier long enough to walk Zael over – and use the flamer to buy myself enough squares to reach the exit.

I let the barrier come down, and send Goriel right through the single-tile gap between the swarm. He’s one marine in the bank, and besides, he’s in Zael’s way – it’s far tougher to redirect a terminator than it is to have them continue on their path. Then I shunt Brother Zael up to the intersection and ready the flamer. As one final measure, I push Goriel just a little further along, to ensure he’s not caught in the righteous fire.

But I’ve made a terrible mistake.

Goriel has used up the last of my command points. I don’t have enough left to light up the flamer. Zael stands there like a lummox in his power armour, his pilot light blinking, as the swarm look on. He probably does a quick swear in pig latin under his breath. And then they charge. 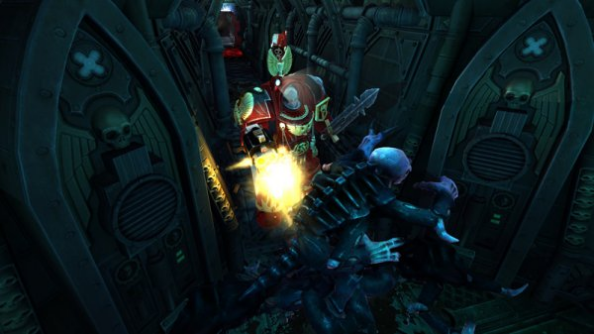 It all falls apart after that. Despite my concerns for his wellbeing, Brother Goriel is gored immediately; Zael takes down a single stealer before he’s trampled underfoot; Omnio, still in overwatch to the south, is no better off for it.

Anything but bookish, it’s the librarian who stands longest – carving through three genestealers and clearing a whole corridor, briefly, in the name of an Emperor countless systems away, to whom a million other similar feats have been dedicated. Calistarius spins on the spot to face two consecutive close combat encounters before he finally drops his chapter’s standard.

Once Jules has slipped out of the hive mind, he suggests that perhaps the interface of an undeniably clunky Space Hulk adaptation was to blame for my final failure. But much as I’d like to blame the software, my mistake was in forgetting that the dam was destined to burst. That if your game of Space Hulk runs to an hour, a moment of calm for the marines is simply the beach clearing before the tidal wave comes crashing down.