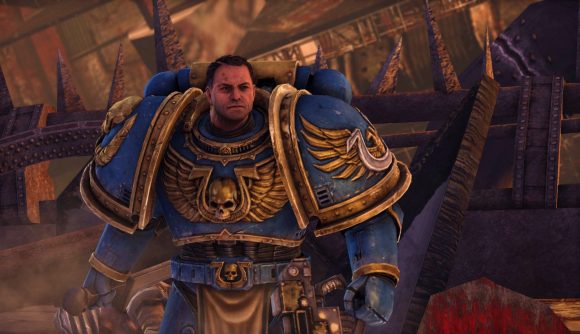 Most games set in the Warhammer 40K universe have drawn from the setting’s heritage in tabletop strategy games, but there have been a few that have let you personally feel the power of the Adeptus Astartes. One of the best of those is Warhammer 40K: Space Marine, which is now old enough to be getting a tenth Anniversary Edition – which is a free upgrade if you already own Space Marine on Steam.

Space Marine is a hack ‘n slash third-person shooter that debuted on the Xbox 360 and PlayStation 3 back in 2011, and it doesn’t waste any time getting you into the action. As soon as you’re introduced to Captain Titus of the Ultramarines, he’s strapping on an assault jump pack and leaping out of a crippled Thunderhawk above Forge World Graia, which is being invaded by Orks.

From the moment his feet touch the ground, Titus sets to work gorily ventilating every greenskin that comes into view, using increasingly powerful weaponry as the campaign progresses. Space Marine pushes you into melee encounters by making the bloody executions the only way for Titus to recover health, so no matter what’s going on, you’ll occasionally need to get up close and personal for some ripping and tearing – ideally with a buzzing chainsword at the ready.