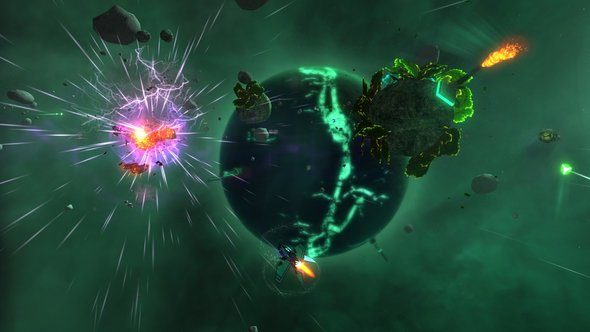 Space Pirates and Zombies 2, the sequel to the 2011 indie title of the same name has now been in early access for almost a year. However, it would seem that developers MinMax Games have had a hard time of late, at least if their Steam community page is anything to go by. In a post yesterday, the team gave a rather lengthy apology and broke the news that the planned multiplayer arena mode that some fans have been looking forward to has been given the same treatment as the average enemy ship. That is to say, it has been scrapped.

Space out with the ultimate list of games set in the big black.

Notching the issue up to a lack of multiplayer backend functionality in the Unity game engine, the team explained that “one thing has become clear, the Arena multiplayer isn’t going to work.” They go on to add that they “have tried four new multiplayer solutions as well as made a good try to resuscitate the legacy networking from Unity 4. But at this point we feel that the mounting wasted time and dead ends are really hurting development progress.”

This will come as a blow to many backers of the project, who not only wanted to play the arena mode but also hoped that it might lead a full co-op campaign mode. Although MinMax Games have been quick to dismiss such speculation in the past, insisting that “it would be like running a 300 player server on a local machine” and would therefore be impossible. This is presumably due to the very AI-driven nature of the game which pits you against hundreds of other space captains who all have access to the same abilities and options as you.

MinMax have been extremely apologetic and have even offered refunds to disappointed players. The reaction to the post has been overwhelmingly positive, with most players offering their condolences and generally respecting the studio’s honesty.