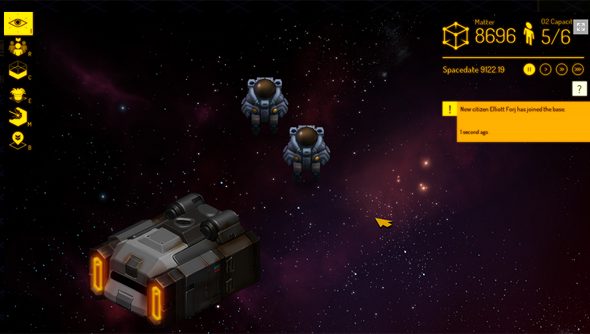 “You folks have been giving us a bunch of great feedback on the forums,” deadpans Spacebase lead designer JP LeBreton. “And definitely one thing we’ve been unequivocally hearing from all comers is ‘More My Fair Lady references’. And so that’s what this title is really all about. We’re really just giving you what you want.”

He is a silly man. But DF-9’s third alpha update’s title also alludes to its headline feature – meteor showers, unpredictably winging their way towards your Spacebase to rip dramatic chunks out of it.

Meteors will occasionally strike the base after a short warning period. A red ring will highlight the soon-to-be-impacted area – and players can expect to tend to fires and even breaches as a result.

The rest of this week’s update is “kind of a grab bag”, by LeBreton’s admission – a range of under-the-hood fixes and improvements, plus the addition of fitness zones. These areas are dedicated muscle-making rooms to prevent your crew from pumping iron in the airlocks, as they’ve been reported doing.

Citizens now run while in combat and other survival-critical situations. You’ll be happy for that, since ill-meaning Raiders can now deploy from shuttles. You’ll see them posing as immigrants, and attempting to enter your base through its airlocks. Brr.

The build had originally been intended to land “early this week”, but the apologetic dev team slipped by 24 hours or so. Today is their last day of development before Christmas – so if you spot any major issues with the update you’ll want to pop the details in the Spacebase bugs and feedback forums right away. Lead programmer Matt Franklin apparently “already has some critical fixes ready to go in testing”.

Our Steve found the game to be an “empty shell waiting to be filled with clever ideas” in his Spacebase Early Access review a couple of months ago. Have you lot spotted any of those ideas yet?