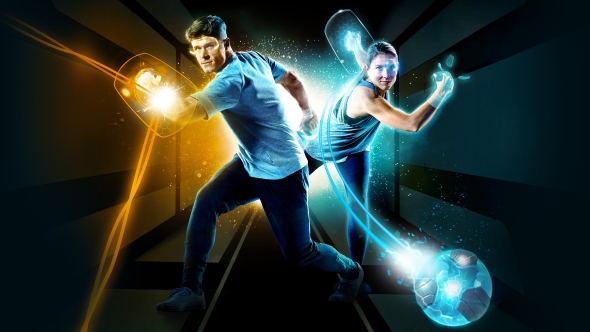 The only goal I had in mind for my VR demo of Sparc was not vomiting on Morgan Godat, the game’s effusive executive producer. It was an admittedly lofty goal given I’d spent much of GDC week in various virtual reality demos and had literally just come from a perilously close call playing Lawn Chair Deathmatch (which is as weird and uncomfortable as it sounds, maybe worse). But after a few short minutes on the Sparc court I completely forgot about the headset and my low-level nausea and just craved one more game.

Sparc is CCP’s first non-Eve universe game and represents a complete shift from the previous two VR titles the company have produced. Where Eve: Valkyrie and Gunjack are relatively straightforward cockpit-based shooters, Sparc gets you out of your seat and gives you a physical presence in a real sport.

“As if it wasn’t high-pressure enough to make the first non-Eve-based game for CCP,” Godat tells me, “we decided we weren’t going to make a video game of a sport, we were going to make a sport.”

That’s no mean feat, but after four or five matches against a real human being in their Tron-style, one-on-one dodgeball court it really feels like they’ve managed it. Sparc is defined by some incredibly simple rules and premises, but even in my relatively short playtime I could see the level of tactical and strategic nuances that could eventually separate the n00bs from the veteran players.

Sparc is set on a tight two-player court, each in their own six-foot square, and the aim is to hurl your metallic ball at your opponent and try and hit them while they try and do the same to you. It’s like a mix of squash, tennis and dodgeball. You can dodge and deflect the ball with your fist, or an activated shield that almost acts like a racquet, but if your opponent misses you yet hits through the strike-zone (think baseball) then their next throw will travel faster and faster with every strike.

It’s basic, but one-on-one sports in particular are built around simple rules and tight logistical constraints. “If you think about a tennis court there’s no bullshit involved there, there’s no fucking around with it,” explains Godat. “There’s not like a bunch of stuff and details and crazy shit in there, it’s just ‘that’s your court, man, that’s the world you live in.’”

“What I really want to emphasise about this is that the goal is to create a Sparc court in this six-foot square in your living room,” says Godat. “That you can meet with your friend on the East Coast and have a game, and when you meet them in that space outside of that court you talk. It’s not like every moment of the game is the game. ‘You’ve got to be playing, you;ve got to be winning.’ No, no. It’s like a tennis court. I go down to the local courts, I wanna be down there and be [like], ‘Hey, anybody want a game?’”

It’s that social element of the game CCP is really trying to build and having recognisably human opponents in there can only help. The tracking of the headset in Sparc, together with the tracking of the hands via either the Vive’s controllers, the Rift’s Touch controllers or PSVR’s Fisher Price Move sticks, creates a surprisingly emotive avatar. Albeit one without legs… 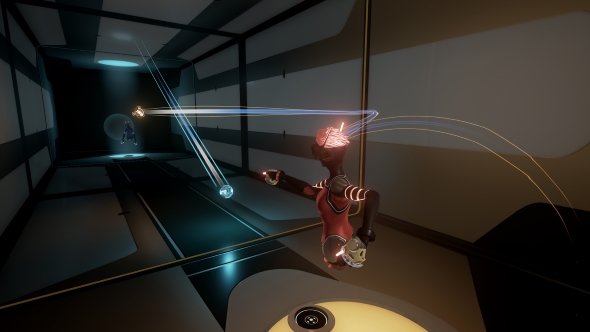 They’re also hoping that recognisably human element will help make it less of a toxic environment than those which exist in other multiplayer games. “You know, that kind of feeling of just meeting up with people and seeing them and saying ‘you’re a human being, I’m a human being, can we try to be marginally human to one another just for a little bit, just for a smidge on the internet?’” he continues. “I’m not pretending it’s going to solve all the internet’s problems, but it’s so compelling to go in and see somebody else and see their body language and hear them.”

It wasn’t available in the demo room, but CCP have also dropped full voice comms into the game so there will be trash-talking available as well as your being able to make rude gestures with the controllers.

My opponent (CCP’s VR comms lead, George Kelion) and I drop into the Sparc arena and I can see his legless torso floating before me, gesturing my way. Throughout the match I can see his physical reactions to what’s going on in-game and can tell when he’s obviously impressed by my overwhelming new-found Sparc skills.

I win one out of five games.

But Sparc is compulsive. I’ve completely forgotten how jetlag, a severe lack of sleep and a permanent background hangover have had me rejecting every VR demo that week the instant I’ve gotten what I need and/or need to wrench off the headset to stop my lunch leaving my body unprocessed. I’m asked repeatedly if I want to keep playing. I do.

I can start to see how a flick of the wrist can put just enough disguised curve on a throw to have it react off the wall in such a way as to completely fool my opponent. I can see how he’s trying to time his throw just after he’s deflected my last shot to really test my reflexes and I want to try aping the same tactic. And I really want another win.

Because of the way it’s been designed on a constricted court you will spend most of the time in-game standing in the same spot. That means the motion-sickness you might get from lurching around isn’t there so you can just concentrate on the game itself. And it also means you can stay courtside as long as you want to play, not just how long your inner ear can cope with.

“We needed to make a game with this generation of hardware,” explains Godat. “We know that you’re going to have a tether. First and foremost I don’t care how much empty space the average person has in their house you’re tethered to a computer so we can’t design something that makes you garrote wire yourself on a regular basis.” 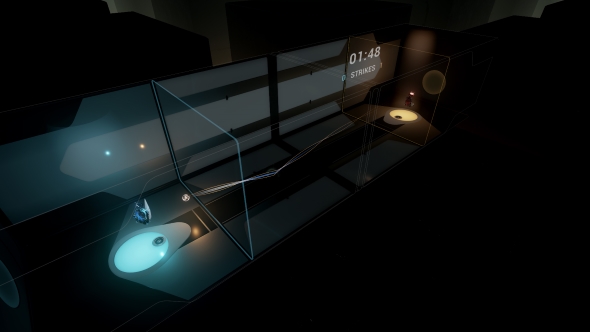 CCP are trying to create a social element on the spectator side too. When you log in to a server you are initially placed on the outside of the actual court, but are also many times bigger than you will appear while playing. If you log into a court with a game in progress that means you can stand around the outside and watch what’s going on. It is though a rather unnerving experience to be on the court when a giant head looms into view above you.

“We want people to feel like they’re in the space together,” he explains. “The example of court-side that I give is the old days when I’d go to the arcades to play Street Fighter 2 against the local champ who’d be standing there on the left side and everybody’s on the right side, lined up waiting to battle it out. We’re not trying to recreate something because we thought people liked standing in line to play Street Fighter, it’s because that’s a really compelling experience.”

“And you have to be able to read the person’s body,” continues Godat. “We want when somebody does something physically impressive in our game we want people to see it and recognise and go ‘that was pretty crazy!’ That kind of social interaction is very critical. Sportsmanlike conduct is a legitimate thing in the world. People get fired up, especially with physical action. In real world sports people get fired the fuck up. They get aggro, they get adrenalin pumping and you’ve got to come back to the fact that you’re playing with other human beings. You have treat people with some amount of respect or it’s not sports, it’s war.”

Sparc isn’t going to become the killer app for bringing people into the world of virtual reality. The simple graphics and gameplay aren’t going to be able to suddenly have people desperate to drop a ton of cash on a headset and controllers for their PC, but I stil wouldn’t be at all surprised if it became the most-played VR game.

It’s these sorts of mechanical multiplayer games which the ecosystem needs right now and Sparc is the sort of virtually real sport that could enthuse and seriously engage the existing VR userbase.

Sparc feels startlingly real. It feels real when you’re on court, not like you’re playing in a computer. CCP have genuinely created a new sport. It’s simple, but engaging, physical, tactical and compulsive.