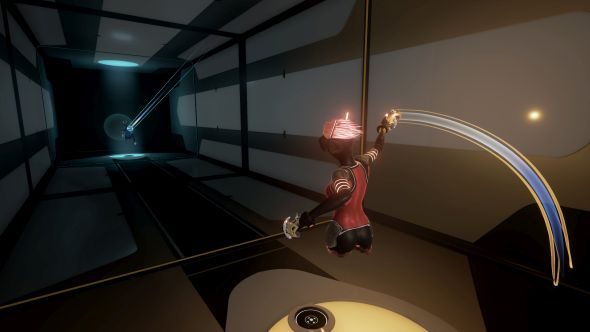 CCP continue their output of new games, this time wholly outside of the Eve universe. Sparc is another VR game, but this time sport-focused, with a projectile-throwing and defending system using full-body detection and motion controls. It’s fast-paced, very Tron and due later this year.

Prefer your sports sat down in a car? The best racing games on PC await.

It evolved from Project Arena, which we took a look at in June of last year via CCP’s fanfest. Jeremy, who has had a little hands-on time the virtual reality scamp, has this to say about it:

“It’s tough to convey how Sparc, or at least the Eve Fanfest prototypes that led up to Sparc, make you feel. Certainly not like you’re playing a videogame. Its touchpoints are both Tron and real, physical sports. Body language is a huge consideration, thanks to the capacity to psyche out your opponent, or read the building frustration in their blocks, or notice the cockiness in their bats, ripe for you to exploit with a perfectly timed shot. It’s no exaggeration to say it’s the most meaningful and game-changing experience I’ve had in VR.”

High praise, and it certainly looks as close to a viable eSport as we’ve seen out of the VR sphere. While the real-world comparisons are obvious, Morgan Godat (exec producer at CCP Atlanta) explains they built it from the ground up to be viable in VR-enabled, smaller spaces: “After our early experiments with standing VR gameplay, we were excited by the idea of building an original sport designed for the current generation of VR hardware. We’ve designed Sparc so that players can express and improve their skill through their physical actions.”

There’ll be all sorts of social systems in place to enable internet play as well as the obvious local competition. Single-player will consist of challenge modes and training, while customisation will be handled with various cosmetics. CCP say we’ll see more of the game soon.