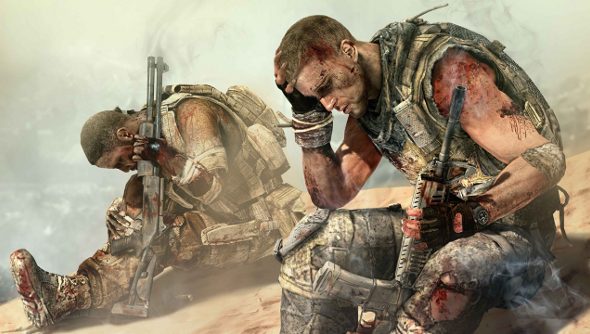 What happens when you make a thoughtful, distressing shooter lacking solid multiplayer and people don’t play it? Well, you make a AAA free-to-play shooter. Spec Ops: The Line made me feel terrible, guilty and exhausted. I should probably feel like that more often when I mow down countless enemies with an assault rifle, but I so rarely do. It was a bit special. But there isn’t much room for single player shooters with a focus on the psychological impact of war.

So Yager is back, but with something that sounds rather different. The studio is currently recruiting for an unnamed F2P shooter, advertising several positions including those specific to a multiplayer component. The listing also mentions “armor and military gears”, hinting at this being another military title. With gears. Insightful, I know.

The terms AAA and free-to-play don’t exactly scream complex, thought-provoking narrative, though that certainly doesn’t preclude Yager from from taking the road less travelled. It would certainly be strange if they completely ditched the themes that made Spec Ops stand out in favour of microtransactions and multiplayer shenanigans.