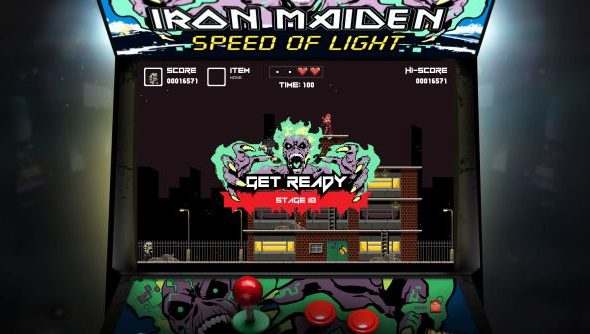 Sometimes you’re writing about e-sports, sometimes indie games, sometimes the latest big budget shooter – and sometimes Iron Maiden. Such is the nature of the job. The legendary band have released a video game as part of the lead up into their latest album. It, and the song it’s based on, is called Speed of Light. It’s basically a prettier Donkey Kong with a couple of extra layers of complexity, starring mascot/zombie Eddie as he tries to save the damsel in distress kidnapped by … some bad dude. It’s not exactly Bioshock, but it is ten minutes of fun.

You can play it over on the official site. I recommend the arrow keys and z+x setup. You’re faster than most of the flaming televisions thrown at you, but unable to jump while carrying an item.

I got to level nine before the environment reset to the basic version. The Heavy’s projectile throwing continued to speed up though, so it’s likely good for a couple of dozen levels of increasing difficulty before it becomes impossible or reaches an upper limit. I like the tune playing in the background which is, try not to be too shocked, a retroified version of the song it’s adversiting.

I’m still reeling from the multiple blasts of how the ‘outside world’ sees games contained here. Eddie’s Mortal Kombat character seems pretty overpowered to me – using your health bar as a weapon is one thing, but the win screen might be taking it too far.I’d probably play that shooter though. Eat BFG, skeleton dinosaur! It seems unlikely that we’ll see the other three, more complicated games made into reality, sadly.

Some kind soul has uploaded the low-bit version of the song seperately, which honestly I prefer: