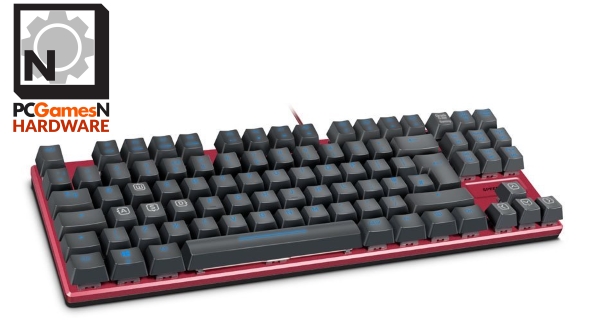 The cut-down Ultor may look a little like a Christmas bauble, with its sparkly red base, but it’s still a decent mech-switch gaming keyboard.

Check out the best gaming mouse to go with your new keyboard.

I’ve been mightily impressed with the last few Speedlink products I’ve had the chance to test. The Torid gamepad is an Xbox-aping controller which matches Microsoft’s excellent ergonomics to create a really solid, reliable pad and the Kudos Z-9 is my pick as the best cheap gaming mouse around today. Though the less said about the Fisher Price-like Drift O.Z. steering wheel the better…

The Ultor board is sporting a very different design aesthetic to the rest of Speedlink’s gaming keyboard lineup. They’re either hyper-angular beasts, which seem to have more in common with a Klingon bat’leth than an input device, or look just like the chunky plastic Dell boards you’ll see cluttering office blocks up and down the land. The Ultor’s design though is much more akin to the stripped-back look of Corsair’s beautiful K-series keyboards, with the keys seemingly hovering above the base.

And that’s to its credit. I much prefer a basic gaming board which focuses on the important stuff as opposed to one throwing as many features at the wall as it can to see what sticks. And what sticks? Shit sticks. 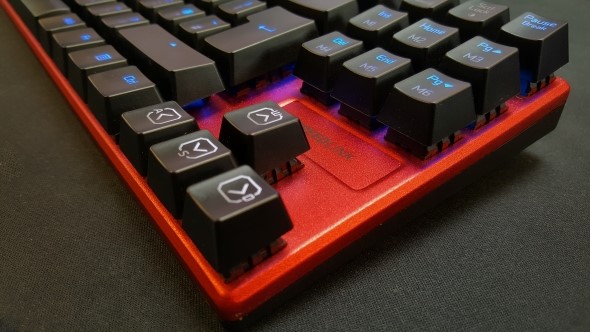 There is nothing extraneous added to the Ultor; it doesn’t even have a numpad. For some gaming folk that will be an issue, but I’d argue the vast majority of us don’t spend a lot of time fussing with the seventeen keys on the far right of our keyboards. The slimmed-down design also lends itself to the LAN party crew who want to lug their machines all over the place in search of a game and to those who lack the desktop real estate at home to fit hulking great peripherals.

But that also means it’s lacking in discrete media controls, relying instead on a modifier to provide secondary inputs for the function keys. I’d much rather have at least a physical volume control; the digital contortions required to press both the Fn and relevant media key at the same time are rather awkward. Especially when the bullets are flying mid-firefight.

Still, the Ultor manages to squeeze in a healthy feature set into its diminutive frame, with a Win-key lock, six programmable macro buttons, locally-stored profiles and full N-key rollover. That means you can mash every key with your face and it’ll still remember what order they were hit in. 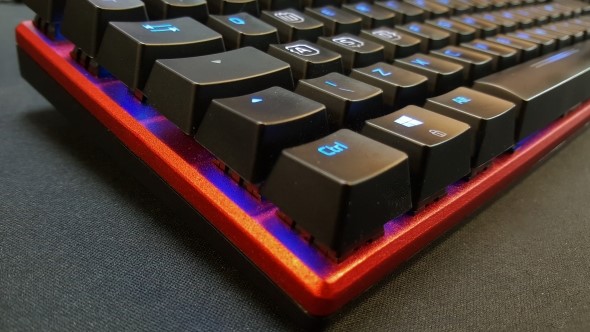 The big question for a mechanical switch keyboard though is: where do those switches come from? Where most manufacturers are picking various shades of Cherry MX switch, and the likes of Logitech and Razer are making their own, Speedlink is taking another tack, they’re using Kaihua Kailh switches. Essentially they’re Chinese clones of the Cherry MX design, though the company also manufactures Razer’s switches.

The Ultor uses the red flavour of Kaihua Kailh switches, which are entirely analogous to red Cherry MX switches. They are though are a little heavy in their action by comparison, not quite as stiff as black switches but definitely firmer than a standard Cherry MX red. 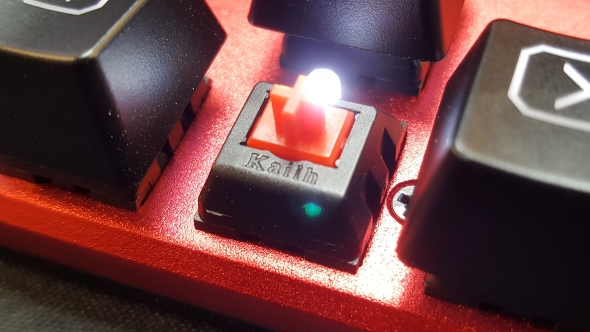 While they’re apparently cheaper than Cherry MX switches I’ve not experienced any noticeable variation in the different keys on the Ultor board and they’ve been nothing but robust and responsive. Where the Speedlink keyboard does feel a little budget is in the machining of the thick plastic keys themselves. Because of the way they go right to very edge of the base, keeping the footprint down as much as possible, I did find my fingers sometimes catching the sharp edges of the keys. The slight bevelling of Corsair keys makes them feel less aggressive to my soft digits. Never done a day’s work in me life, guv.

But this isn’t a budget gaming keyboard, despite the clone trooper switches, the Ultor is retailing for $99 (£63). But it’s got an impressive feature set for such a svelte gaming keyboard, even if it doesn’t have discrete controls or strobing RGB LEDs.