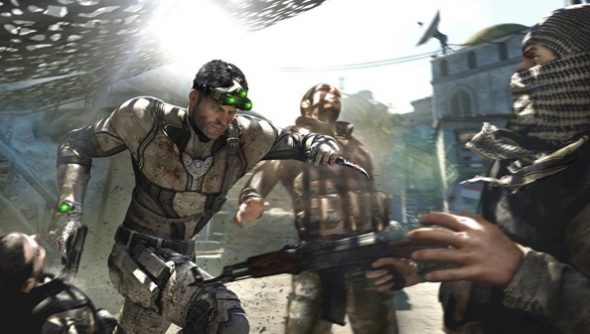 “When you’re coming up behind someone you want to take them out quickly and efficiently,” advises Ubisoft animation director Kristjan Zadziuk, terrifying everybody else in the office. “So we found a good way of doing it is basically going for nerves in the back of the head, the back of the neck, go for kidneys as well.”

“We try to go for the idea of sound suppression,” he continues. “So it basically gives Sam some more time to do what he needs to do. But the first action is always going to be some sort of suppression.”

See guards’ sounds suppressed in the developer diary below:

The continued existence of non-lethal takedowns will reassure longtime fans somewhat, but the ‘abductions’ certainly won’t.

Abductions are a new stealth takedown mechanic that allow Sam to thump and remove enemies from their patrol routes while hiding behind low cover. The sort of low cover that, if one sequence in the video above proves representative, will have third-person action weary players suffering from eye-roll induced motion sickness.