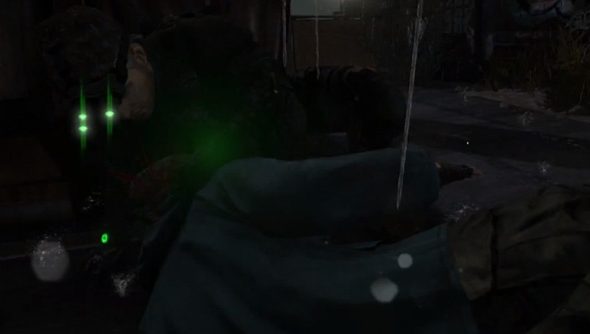 Splinter Cell: Blacklist has ruffled a few feathers since first being announced. For a start there was the E3 footage that was set during the day and showed Sam Fisher running about sliding over car bonnets Starsky and Hutch-style while shooting men in turbans. Then there was the news that Michael Ironside wouldn’t be voicing Fisher and instead a younger more mocap-able actor would be stepping in. So Ubisoft are going to need to claw back some ground before the game is accepted by the Splinter Cell fans. The latest dev diary is a step in the right direction:

It’s all about the lighting and camera style of the new game and, while that may not seem like the most exciting of topics there’s definitely a few things to take away from it.

For a start, the through-the-lens look in games is a too-rarely attempted look. I’m not a great fan of games not trying to be games, and instead just being a film interspersed with interactive segments, but this isn’t a game trying to be cinematic, this is a game taking something from cinema and throwing it into the context of a game. We talk of the “camera” whenever we are dealing with a third-person game so it makes sense to try treating the virtual camera as a physical entity in the world. On one level, yes, it does give the sense that Fisher is being followed by a documentary crew but it also captures the atmosphere of the world Sam is in. Rain hitting the lens isn’t going to change the whole game or make you admire the verisimilitude – though, technically, anything that draws attention to the verisimilitude is doing it wrong – but it is a nice touch to deepen the involvement of the player.

Another game that tried it, and I think it pretty underrated for the attempt, is Kane & Lynch 2: Dog Days, where the game camera had all theartefactsof a cheap camcorder. It looked fantastic.

the other thing to take away is that, hopefully, with this much attention being lavished on the small things, Fisher’s silhouette, the camera effects, the need for dynamic lighting, an equal amount of attention is being invested into the larger things – asymmetrical levels; complex, yet porous, buildings; and making Sam’s ass tight enough to crack nuts.