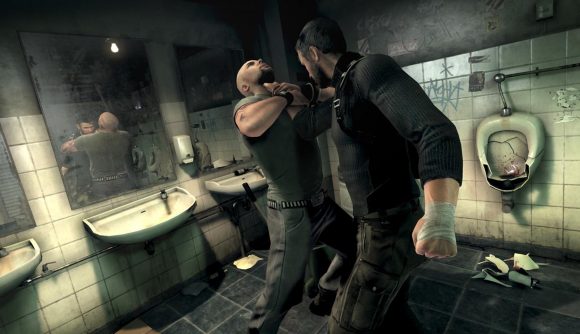 Part of the intrigue in a good stealth game is trying to do things with as little force as possible, avoiding killing anyone that isn’t absolutely required. Tom Clancy’s Splinter Cell was usually a reliable series for hardcore stealth with minimal casualties, but then Splinter Cell: Conviction happened, and Sam Fisher developed a serious body count.

Reddit user TK-576 recently took the liberty of totting up Fisher’s body count across the entire Splinter Cell series. The criteria was simply deaths that were 100% unavoidable, either in cinematic or in gameplay. The first four entries hold true to the base concept of being able to sneak your way out of hurting anyone too badly, coming in at 21 kills between them. Then, in 2010’s Splinter Cell: Conviction, Fisher’s kill count jumps up to a wholly ridiculous degree, leaving behind some 418 bodies.

Splinter Cell: Conviction was a departure for the series. Rather than pure espionage, it’s more action-oriented, and a side-effect of that is Fisher’s takedowns are usually lethal, and even when you opt against lethal means, NPCs refer to the bodies as dead. A section at the Lincoln Memorial where Sam is told to be nonlethal, and some parts where you can escape without interacting with anyone, are the only exceptions.

The makers put together a video of Sam’s kill count in Splinter Cell: Conviction, which you can watch below:

The Splinter Cell series has been largely inactive since 2013’s Splinter Cell: Blacklist, which, incidentally, is you can finish without a single kill. A new installment has been rumoured, with Ubisoft planning five triple-A games this year, but since Assassin’s Creed Valhalla and Far Cry 6 have joined Gods and Monsters, Rainbow Six Quarantine, and Watch Dogs Legion, it’s looking unlikely for 2020 at present – here’s hoping for a surprise during the upcoming Ubisoft Forward.