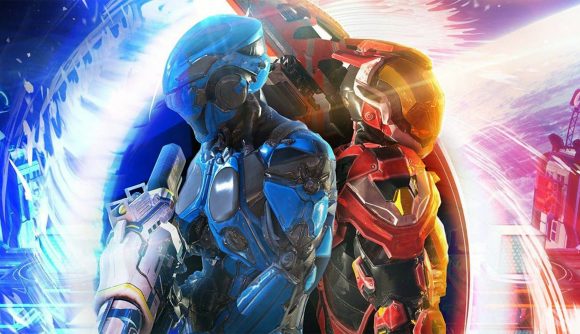 1047 Games, the developer behind the Halo meets Portal multiplayer shooter Splitgate, would like to see the “really cool” Fortnite-style season model come to its game – with stories told across three-monthly seasons. However, don’t expect to see a single-player campaign anytime soon.

1047 Games CEO Ian Proulx responded to a fan question in a developer Q&A on Twitch earlier this month, specifically asking about the possibility of a single-player story campaign coming to Splitgate in the foreseeable future. Given that Splitgate is an increasingly popular multiplayer-focused shooter made by a relatively small indie team this already seemed unlikely, although Proulx seemed open to it. “There’s definitely something there.”

However, the Splitgate boss seemed more open to the idea of Fortnite-style seasons with a story told over several months instead. “It’s really cool to me that there’s this kind of story, even though it’s a multiplayer game,” Proulx says. “Every three months you’ve got the new season [with] new characters and the Battle Pass to go with it. I think that would be really cool.”

Nevertheless, Splitgate is still currently in beta – where it’s staying for the time being – and Proulx suggests 1047 isn’t at a state where it can do things the same as Epic does. “I don’t think we’re ready to go there yet… there’s a lot we need to do to turn this small, little indie team into a triple-A company.”

Splitgate is breaking records left and right and continues to grow in popularity on Steam, and it may be at a place soon where it could compete with Fortnite and the rest of the best multiplayer games on PC. Here are some tips to get started, if you haven’t already checked it out – it’s free, you know.