I love procedural generation in games. Almost everyone who knows me knows this, because I never shut up about it. This means I tend to fall hard for roguelikes, for anything with endlessly reinvented levels, even for fractals. There’s a lot of strategy and roleplaying games that feature random generation, but not so many first-person shooters. There is, however, Tower of Guns.

Tower of Guns is a cartoonish first-person shooter whose style brings to mind Borderlands 2 and it certainly doesn’t plan to do things by halves. It plays like the shooters of old, all frantic strafing, rocket jumps and speed runs, and it features enemies that include the enormous angler bot, the sinister grinder, far too many giant turrets and something with the really rather worrying name of hug bot. “He’s sad until he sees you, then he wants hugs.” Oh dear.

While a platformer like the amazing Spelunky might only generate its levels, Tower of Guns is a game that will also generate its enemies and bosses. It even promises random powerups which present the possibility for all sorts of ridiculous abilities. The Greenlight page talks about the “centuple-jump” and then there’s the Tutu of Death. Do you want a Tutu of Death? I suppose anyone of us would.

Crazy combinations also extend to the firearms themselves because, I guess, why not? You can think of them as modular things, just waiting to have their powers combined and levelled up. “A rocket-launching shotgun is very satisfying,” says the Greenlight page. I bet it is, though I’m also intrigued by the pizza oven gun, which shoots sawblades that have a habit of bouncing about the place. 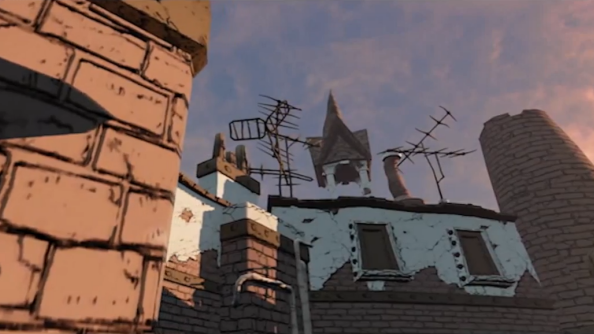 The person behind that Greenlight page is artist Joe Mirabello, striking out on his own after spells with Iron Lore Entertainment and the ill-fated 38 Studios. Although Mirabello calls himself an artist, he’s responsible for all the work behind Tower of Guns except for the music, making him a designer and coder now, too. (And if you just happen to be at this year’s PAX East, Mirabello will be on a panel of ex-38 Studios staff.)

As well as the enemies you’ll face, the levels themselves will have their fair share of danger. The Greenlight video shows off falling boulders and walls that close in. I smell a trap or, I suppose, lots of traps, many of them doubtless randomly generated. 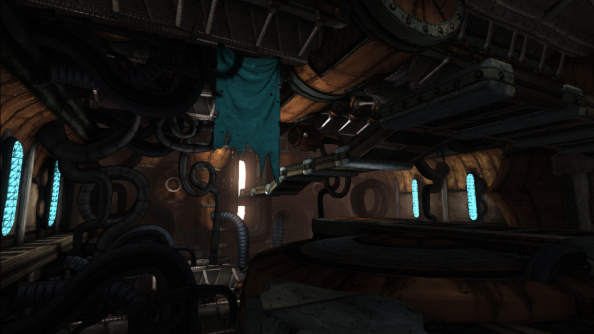 Tower of Guns is still work in progress, but it’s been in progress for quite some time now (the development blog dates back to June last year) and it’s looking pretty damn stylish. It’s striving to be frantic and furious in almost endless combinations, but Mirabello also wants it to be a short, tight experience, different every time you play and yet giving you bite-sized chunks of action.

Typically, each play of the game should be between just one or two hours, which Mirabello believes is enough time for you to blast a few monsters, loot a level or two, grab a few powerups, spend your cash on upgrades and prepare to face down the boss. If at first you don’t succeed, you can always try again, and again, but the idea is that no two plays of Tower of Guns will ever be the same. To someone like me, that sounds absolutely fantastic, because this could be the game that keeps on giving. Or killing.