It’s now official – the Spyro Reignited Trilogy PC release date is set for September 3, 2019. A Switch port of the remade trilogy was showcased on today’s Nintendo Direct, and a press release confirms that the games will be coming to PC via Steam at the same time. The collection will soon be available for pre-order at a suggested price of $39.99 USD.

Las month, the Taiwanese ratings board outed the existence of the Spyro remake for PC. The box art – as much as it can represent a package when it says “download only: no disc included” on the front – includes a logo for Iron Galaxy. Today’s press release confirms that this is the studio handling the PC version.

Iron Galaxy was previously responsible for porting the Crash remakes to PC, so it looks like the developers are assisting on this one, too. Good news, considering how the Crash port turned out.This ratings board listing (via Nibel on Twitter) doesn’t provide much more detail than that.

A PC listing appeared on the official website last year, though it seems that bit was an error at the time. 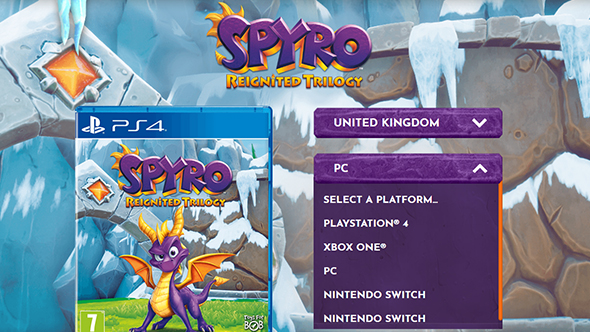 This Spyro collection features all three of the original PlayStation games rebuilt from the ground up to look nice and pretty according to modern standards.

Check out the trailer above if you want to see it in action.

Read more: Get nostalgic for the best old games on PC

With Spyro the Dragon, Spyro 2: Ripto’s Rage!, and Spyro: Year of the Dragon all included you’ll have over 100 levels to take you back to the heady days of mascot platformers.