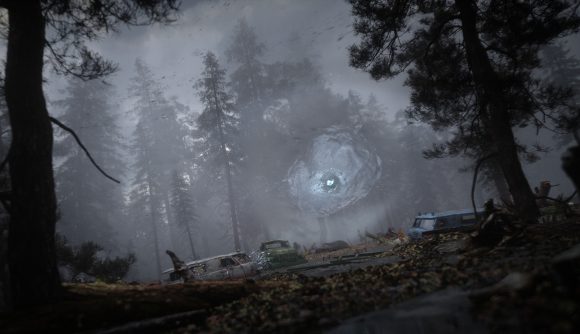 GSC Game World announced STALKER 2 in 2018, and since then we’ve seen little of the game. Yet while it seems the game was announced principally to court publishers early, production is proceeding slowly, but surely. It got a website with early art and music in 2019, and the developers announced earlier this year it would be built in the Unreal engine. Now, at last, the devs have revealed the first STALKER 2 screenshot.

This is a “first glimpse” at STALKER 2, according to GSC Game World, though it’s pretty limited as glimpses go. We see a load of wrecked cars on a rainy, forested roadside, while a mysterious anomaly hovers above. And… that’s about it. Sure seems like they’re making a new STALKER game, I guess.

The devs also released a brief message alongside the new screen, thanking fans for their support. “A lot of you are joining social isolation now. That’s why today, on a very special occasion, we are ready to slightly uncover the mystery of what we are working on. This is the first glimpse of STALKER 2.”

There is, apparently, “more to come in 2020,” though we’ll have to continue waiting to find out what that further information will look like.

If you’re looking for pieces of STALKER flavour, you can check out our lists of the best FPS games, RPG games, and open-world games, though for now you might still be left wanting for that particular blend of all three.