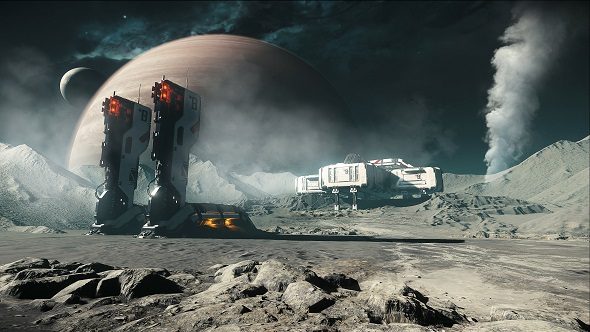 In a large post over on Cloud Imperium’s website, the developers behind the eagerly anticipated Star Citizen have announced that its 3.0.0 alpha release is set to launch on June 29. Adding in three new moons, a new planet, derelict ships to explore as well as the ability to load and unload cargo from your ship, this update is one for all the space truckers out in the galaxy.

For more hyperspace adventures, check out our list of the PC’s best space games.

While the June 29 release is probably what most Star Citizen fans were looking forward to hearing about, the post details the intense planning that goes into making a single content update. It breaks down each deadline for all departments working on this update, showing what they still have to do ahead of the 3.0.0 release and what has already been finished. So, an element like the three new moons in the Crusader system are all feature complete, while the surface outposts that will appear on these moons are scheduled to be finished on June 2.

The accompanying video posted as part of this update goes into greater detail about this design process, running Star Citizen fans through the the concept stage, right up to implementation. When you consider how expansive both the game and the team working on it are, this post should hopefully show impatient fans why it takes so long to release updates for a project as huge as Star Citizen.

Besides the in-depth breakdown on the 3.0.0 update, Cloud Imperium have also released the content schedule for the rest of 2017. This schedule shows what every single development team is working on throughout this year and when they are planned to be complete by. It is just a sea of different colours, with deadlines stretching right up to the end of December. You can download this schedule for yourself if you’re a super dedicated commander, so you can keep track of exactly what Cloud Imperium are working on each month.

There are plans currently in place for what is coming in update 3.1.0 and 3.2.0, which can be found over on the Cloud Imperium website. 3.1.0 seems to focus around the FPS elements of Star Citizen, while 3.2.0 is centred around interstellar exploration with a new radar system, a cargo overhaul and the addition of ship-to-ship refuelling.