It looks like Gary Oldman won’t be the only veteran actor to grace the cast of Squadron 42, Star Citizen’s fleshed out campaign mode. Cloud Imperium Games seem to be taking the casting for this portion of the game very seriously indeed.

We already reported that Gary Oldman would be playing Admiral Bishop when we revealed a bunch of new Squadron 42 screens.

But now it turns out that there’s a bunch of other acting talent in as yet unspecified roles: there’s Luke Skywalker himself, Mark Hamill; there’s Gillian Anderson, whose journey for the truth in X-Files has finally took her into the stars; and there’s also Andy Serkis, who is no doubt doubling up as a motion capture expert as well as playing a role – I’ll be disappointed if he isn’t some kind of space monkey 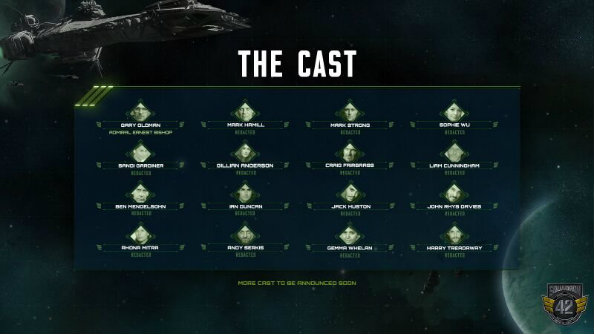 On top of this, there are also a bunch of not as famous people and you can see them all by looking at the picture above. Yes.

It’s a good sign that CIG are taking the campaign just as seriously as the larger online universe. They even released a behind the scenes video that shows the work going into capturing the actors’ performances and transferring them into the game where they’re then rendered in real time.

It seems like a lot of work, but I don’t know how they get anything done when they could be contorting famous actors’ faces into hellish expressions. The video is worth it just to see Gray Oldman gurning and some poor guy with his virtual face skin stretched out like the skin on a drum.Moisturise me!

It’s impressive stuff, but I still reckon Oldman’s beard needs work. Be warned, though: it might give you nightmares. Have a look at the video below: