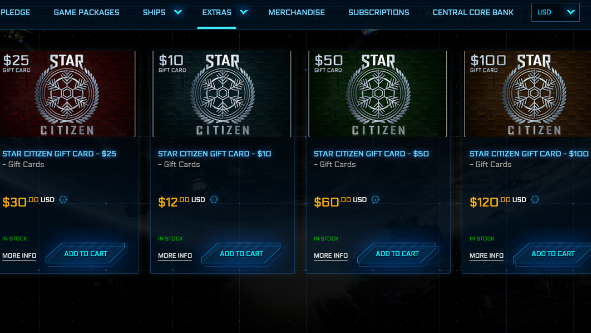 Update: Cloud Imperium’s head of communications David Swofford got in touch to clarify a few points. As various readers have pointed out, the reason for the higher prices is because of VAT laws within the EU:

“Euro laws mandate that VAT is included in the price. If Phil had his monitor turned on to US$ currency, then it will show up just as he depicted in his screen capture (assuming he had UK listed as his country). In the US, you aren’t mandated to include sales tax in the selling price, but you can bet that when you get to check-out, that tax will be added (depending on the state where you are purchasing).”

In response to our comments that gift cards having VAT included on them meant that buyers were paying double VAT if they used the gift card – once for the gift card, then again on the items they purchased with the gift card – David explained CIG’s fix:

“The system is engineered explicitly so that you don’t pay double tax. If you apply store credit to an item in your shopping cart, we decrease the base price of the package by that amount.

“If I buy a $100 gift card and my country is in the EU then I will be charged VAT. It is the law that we must display all prices inclusive of VAT.

“If I go back to the storefront and my country is in the EU I will see ships with VAT values displayed (as per the law). If I put a $100 ship in my cart (which is displayed as $120 inclusive of VAT), then go to checkout and apply $100 in store credit from my gift card, then you are done, you don’t owe anything. If you put $50 in store credit then you’d owe $50+$10 in this example, and so forth.

“In short, we don’t double charge VAT. And you’re not going to be taxed on anything but new money.”

Original story:I’m going to come right out and say it: I think $60 is too much to charge for a $50 gift card. Star Citizen looks like it will one day be an incredible, all-encompassing space sim, but looking at the game’s ‘extras’ store page feels like I’m actually gazing at a work of fiction, meant to depict the hyper-capitalist dystopia in which the game’s set.

All gift cards are currently in stock. What luck!

Today marks the arrival of a new spaceship – the Endeavour research vessel. It’s “a fully modular space platform designed to be adapted for a variety of scientific and medical tasks,” according to its store page. “Initially developed as a floating laboratory, the MISC Endeavor can be outfitted for everything from spatial telescopy to use as mobile hospital.” The basic model costs $420. Or, if you were to pay for it using gift cards, $504. 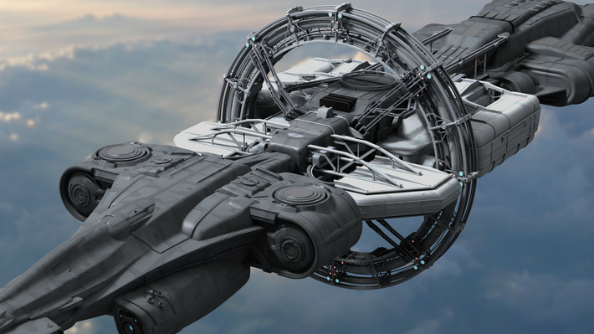 The master set (above), which includes features such as lifetime insurance, a poster, a med bay, a supercollider and a hangar, totals $1080, which strikes me as a bit expensive for an imaginary spacecraft for a game that isn’t out yet.