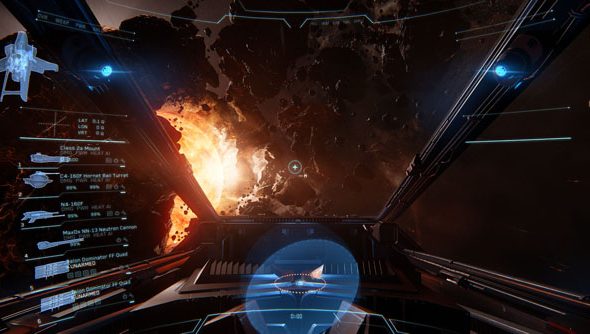 Star Citizen received a huge patch last week, one that added new enemy ships to the Arena Commander mode and made many fixes to its network code. The rubber banding issue’s been solved for multiplayer deathmatches and Roberts Space Industries’ reckon they’ve made gret strides for eliminating it in the final, larger, persistent game.

Most importantly, though, there are now flushable toilets.

One of the modes in Arena Commander lets you fight in a combat simulation against AI ships. Patch 12.5 adds a new ship type for the enemy Vanduul to pilot against you. This will spice up single player a tad but the real changes come in the form of multiplayer updates.

One of the focuses of this patch was taking feedback from the community and balancing the ships for dogfighting. “With top to bottom changes of virtually every tweak-able value on every ship and item what we’ve ended up with is the most balanced multiplayer dogfighting that we’ve had to date,” writes associate producer Travis Day.

With the release of the Arena Commander update only a small portion of backers had access to PvP but that number’s been steadily increasing since launch. “The increased community participation exposed many weaknesses in our nascent backend and matchmaking systems that did not manifest until we reached much higher numbers of concurrent players,” Day explains. “For patch 12.5 we’ve diagnosed and addressed most every problem that the increase in players had exposed. For players this means that you will connect successfully to a match much more often, experience far fewer random disconnects, and in the event you are disconnected you will be able to rejoin the match much more readily. On top of this we’ve also better stabilized the game servers and resolved most all of the known crashes.”

One of the key issues to come out from the Star Citizen alpha is a rubber banding problem. In multiplayer matches each player’s position, rotation, and velocity wasn’t being correctly communicated to each player’s game. In this update RSI say that they’ve “significantly reduced the occurrence of the divergence and also implemented systems to correct it much more quickly and seamlessly.” The problem’s not been solved but greatly improved.

The studio have also “identified areas in which we could further improve synchronization for future iterations of Arena Commander and eventually the Persistent Universe. These future changes include dead reckoning to increase the visual quality of ship movement while simultaneously reducing the amount of data sent to the game clients, along with adding time synchronization to allow the client to display the current game state sent from the server more accurately.”

Of course, the most exciting update in this patch is the newly added flushable toilets.

Here’s a rundown of the patch’s key changes:

I had a terrible time with the initial Star Citizen launch but these patches show RSI are rapidly solving the issues I came across.