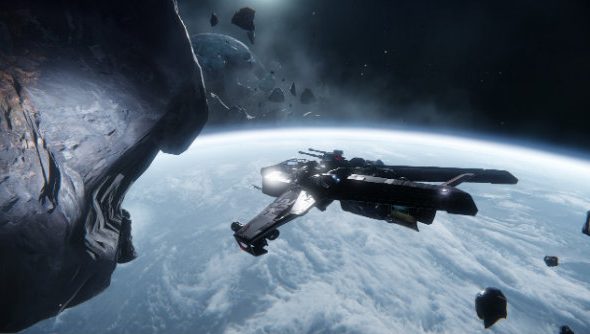 Update 12 June, 2016:  Star Citizen alpha 2.4 is now live for everybody and is selectable from your launcher.

Alpha 2.4 lays the groundwork for the game’s persistent universe, with the introduction of persistent characters, currency and shopping. There are also major changes to the controls, updates to the ship roster (including making the massive, multi-deck, seven-crew Starfarer flyable in-game), bug fixes, balance updates and more.

You can read all about the new systems in the original post below, and there’s also a breakdown over on the Star Citizen site.

Original Story 20 May, 2016: Star Citizen v2.4.0 is now live on the game’s public test universe, a set of servers that slowly trickles in players so Cloud Imperium can see the data from the tests with manageable numbers. The new patch adds a host of changes, including the all-important character persistence.

For more floating in the eternal blackness, here’s our list of PC’s best space games.

One of Star Citizen’s main goals was always to create a persistent universe for players, giving them a virtual life as a smuggler, soldier, fighter pilot, bounty hunter, trader, or whatever other lifestyle they want to live among the virtual stars. The latest update released on the PTU marks the very first stage of achieving that goal.

In the PTU, the game will now save your character between game sessions with data on alpha UEC (Star Citizen’s currency), item purchases, hangar configurations, ship loadouts, character loadouts, crusader reputation, and ship ammo and missiles (Crusader only) all being retained.

There are also new outlaw and bounty hunter missions, improved control schemes, port modifications and loads more. If you do have access to the PTU, Cloud Imperium ask that you stick to the default control scheme so they can work from player feedback. The new controls are an attempt to unify schemes across FPS action and flight, with more inputs now optimised.

“Tying all these new features together and making them truly possible is our first iteration of server-side Persistence – our first persistent server databases,” said Cloud Imperium. “With this we can begin storing information about in-game characters, items, currency and reputation so they can be recalled between game play sessions.

“We also have our first pass on control unification between flight and FPS controls which promises a greater experience to players, new flyable Starfarer and Starfarer Gemini, the hangar-ready Reliant and numerous fixes across the game. During this initial testing phase, PTU access will be restricted to a small group of players that we will expand on over time as required.”

The full patch notes, along with the usual caveats, can be found in this comment thread on Reddit.