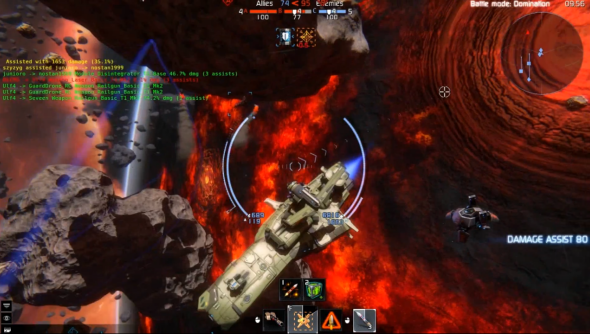 While there are lasers lighting up the darkness, and interceptors dashing between asteroids, Star Conflict isn’t simply squeezing triggers until spaceships explode. It’s as much about wielding new equipment onto your starfighter, about throwing the switch on your cloaking device or chucking out flares to shake off an incoming missile. Fitting out your starfighter is going to be almost as important as anything you do in the cockpit, not least because things in space move a lot slower than you might think.

That doesn’t mean its simpler, easier or any more forgiving, mind. Right now it’s a little tough on new players. For all the futuristic technology that was bolted onto my starfighter, I found combat to be more measured than I expected, and by measured I partly mean slower and even a little bit tactical. Opening up the throttle even in a nippy interceptor doesn’t exactly make the scenery fly by and flight controls are a little sluggish. I’m sure this is in part to keep the combat competitive and to make sure you’re think carefully about your maneuvers and your positioning, rather than simply dashing about the place and leaning on the afterburner when things get too scary.

Control is straightforward and via the mouse, with you pointing your cursor in whatever direction you want your vessel to fly and also where you want your weapons (which have a small amount of traverse) to fire. The WASD keys take care of your throttle and sideways movement, while Q and E control your roll. It’s intuitive and very simple, though it does mean that for long periods of turning you’re forever sliding your mouse so far that you need to pick it up and put it back down again. You’ll also be wise to modulate your shields against the sort of weapons that are being used against you. There’s a considerable difference between them and it matters whether you’re being struck by kinetic or thermal weapons, for example. 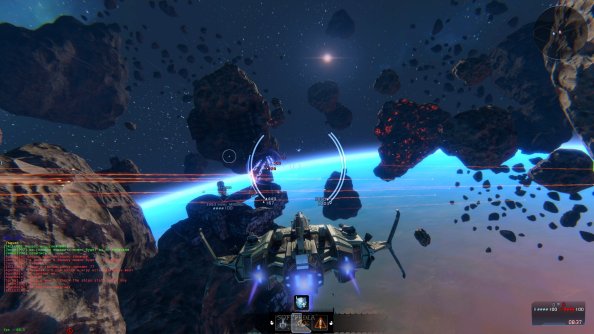 None of this makes for a high-octane, wrist-twitching experience of precisely-timed maneuvers or expertly-aimed shots, but instead creates more of a galactic ballet where canny use of the terrain is the key to staying alive. Combat in the emptiness of deep space would be a barren affair, so it’s pleasing to see that a vision of the future peppered will all sorts of cosmic crap.

You’ll be fighting your way through orbital junk, weaving through asteroid fields or flying around what seems to be some sort of giant space station, meaning there’s always plenty of opportunities for you to use your surroundings to take cover or to make a safe approach toward your enemies. Though you’re flying via a third-person, zoomable perspective, it can be hard to judge some distances and tell exactly when you’re going to collide with something. Precise maneuvering can take some skill and paint scrapes are common.

The slower pace of the game, combined with the special powers your inventory gives you, means space combat can be tough. Once you have one of these sluggish starfighters in your sights, twisting and squirming under your withering fire, with missiles locked on, it can be difficult for that poor pilot to escape. It’s similarly hellish if you find you’re the one under fire or, God forbid, outnumbered, as weight of numbers almost always wins a dogfight. 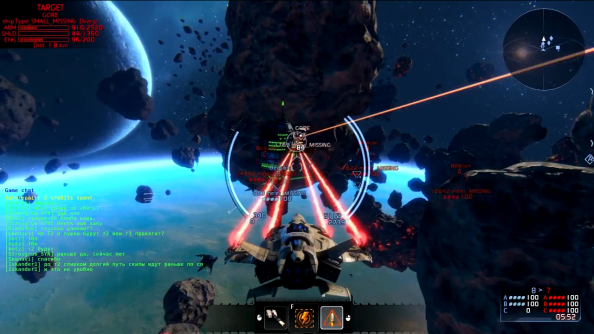 Alongside whatever active and passive modules you install, you’ll find room for a rack missiles which, once you can get them locked onto an opponent, are unerringly accurate and often quite deadly. Each ship has slots for shields and weapons, which you can swap in and out as you upgrade them, but also space for cloaking devices, shield boosters and repair tools.

If you’re expecting a straightforward space shooter, you might find this more of an acquired taste. While it doesn’t have the sense of speed or momentum that you might find in a PC classic like X-Wing, it does give you far more to do between battles than simply patching up your ships. Choosing and upgrading your equipment gives you meaningful options and you’re likely to spend more time just experimenting with different gear. There are plenty of ships to try out too, from the spritely interceptors to the slow, tank-like frigates and, this being a free-to-play MMO, if you can’t unlock them with the experience you’ve earned thus far, a little wave of the wallet will change all that.

The far future presents the option for some interesting game types. There’s a bombing run mode where you must snatch EMP bombs and deliver them to the enemy base, and another known as Combat Reconnaissance, where your ships can only spawn on your team leader: once they’re out of the fight, there’s no more respawning for you. Unfortunately, the game’s communication options are threadbare and it’s almost impossible to co-ordinate with the people you play with. 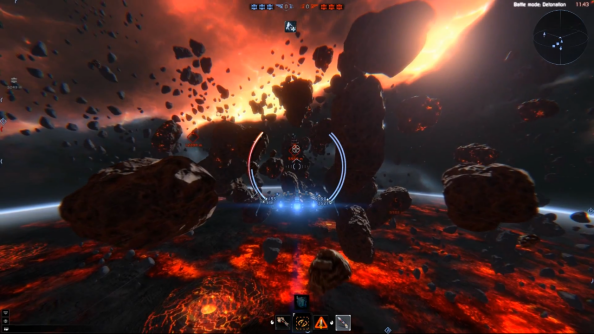 Back in January I had the pleasure of looking at an excellent and yet fairly unknown MMO called War Thunder, an extraordinarily exciting free-to-play game that (so far) is all about aerial combat in the first half of the 20th Century. Star Conflict is by the team behind War Thunder: they just might have a second such hit on their hands.

Star Conflict is in beta right now, so all this is subject to change and hopefully improvement. It also suffers from something of a reduced player base at the moment, something that surprises me as the game’s already available on Steam. While War Thunder had to fight its way through Steam Greenlight, it’s the more polished and more popular game. Strange. Still, I would thoroughly recommend giving it a go and seeing if its particular flavour of space combat appeals to you. It may end up being that acquired taste I mentioned, but its free-to-play nature means we can all at take a nibble.

Good luck out there.