Two things exemplify the way I entertained myself during childhood – science fiction and JRPGs. Sci-fi is still a go-to entertainment pillar for me, with its usually optimistic promise of progress that helps us transcend our physical and existential limits. JRPGs, by contrast, have dwindled to hold basically no space in my life anymore.

Though I appreciate and respect the turn-based combat that the old 16-bit era made famous, I no longer have the time for such lengthy adventures in which the necessity of grinding random battles outside of the context of progressing the story is an unspoken understanding.

This is why Star Renegades, with its old-school aesthetic and modern take on the Final Fantasy-esque turn-based battle, rang a few important bells for me all at once. Over a dozen hours in, Star Renegades still rings, but maybe not with the same crisp tone it did in those first few runs. Its mash-up of Into the Breach-style determinism in combat, with its FTL or Slay the Spire-style metagame decision-making, keeps the goal of saving all of reality a difficult and engaging one.  But you stop seeing new things or getting new rewards earlier than in most games like it, leaving the incentive to return after your first clear pretty light.

An Imperialist nation of conquerors hops from dimension to dimension to dominate each reality for their great Mother. As the only line of defence against it, your Renegades – a crack team of mercs ranging from robotic game hunters to gun-happy conspiracy theorists – must infiltrate the enemy and stop them from plundering three planets of their space McGuffins. Or die trying. 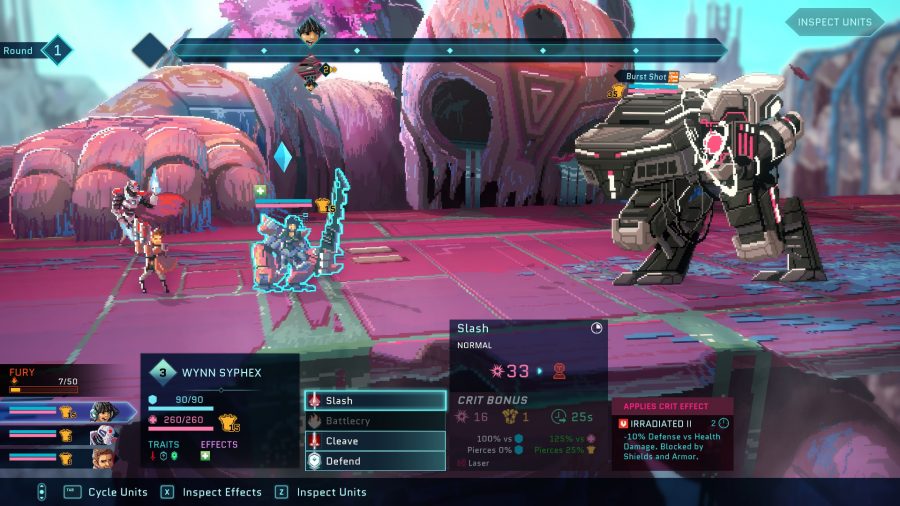 Each attempt is like a condensed JRPG quest, complete with globetrotting and strategic fighting. The former is hit-and-miss. Every map consists of large open spaces connected by gates that must be breached to liberate the zone behind it. You have a limited number of breaches per day, and a limited number of days to free as much of the planet as possible before the local big boss approaches and must be dealt with. I loved the flow and decision-making involved with picking the right way to navigate a planet, balancing the risk of taking on several battles versus the gathering of useful resources and equipment.

More like this: The best tactical RPGs on PC

I didn’t love that most of the map’s points of interest, highlighted by question marks, were points for some minor dialogue moments but nothing more. Outside of random events like alien battlecruisers showing up every few runs, maps never had anything meaningful to find – no alternative locations or pathways. Like the game’s pixel art, it’s largely just for show (though it must be said: that pixel art is uncommonly beautiful). 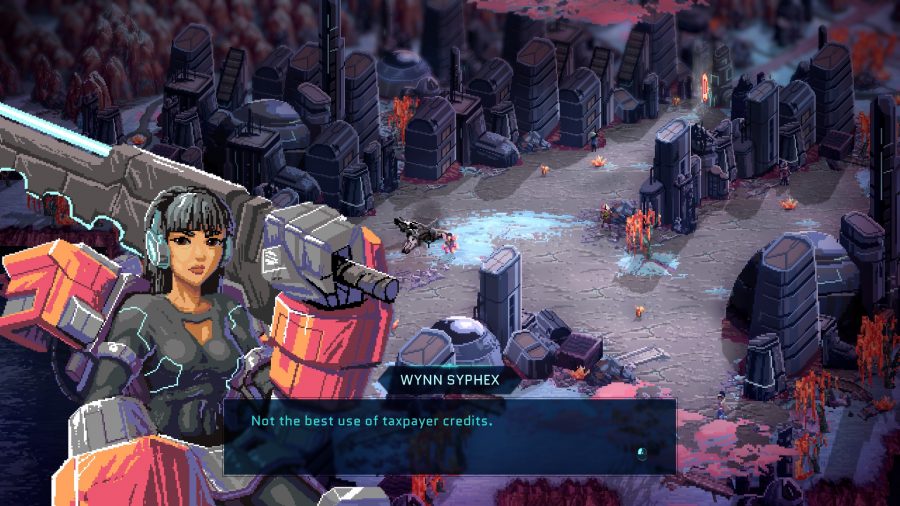 The inverse is true of the combat. Battles are dense with different attack types, elements, resistances, and so on. In more difficult encounters, where taking advantage of weaknesses is paramount, this can be a bit of a burden to sift through and prepare for. But the actual moment to moment tactical action is a largely satisfying dance up and down a familiar turn timeline. Unlike the games it resembles, actions don’t happen as soon as a character’s turn is up in Star Renegades. Instead, every action costs a certain amount of time, and will plot the character on the timeline.

When you're deep into Star Renegades, even the most trivial battles feel like interesting puzzles

If your attacks hit the target before the target can attack, they’ll score a critical hit – usually meaning more damage and additional effects. For a limited number of strikes, it will also push the affected enemy further down the line, delaying their attack. If they’re pushed off the timeline, they are broken, and won’t attack that turn.

I really dug this emphasis on delaying and deferring enemy attacks in order to open up big offensive attacks of my own. It, coupled with the diversity of abilities in each of the 13 potential character classes and the clever and difficult enemy encounters as your runs get longer, really creates a combat experience that will be hard to find anywhere else.

I do wish that some of these characters felt more useful or powerful earlier, however. You start with a group of three, and as you progress from world to world you recruit additional members, up to a total of six. You can spend points to level them up when you recruit them, often being able to skip right past their lower, weaker levels to those where they become powerful. Those who enjoy discovering late bloomers will of course enjoy this, but it’s a trope of these kinds of games that has always annoyed me in its opacity. I wish there was some sort of indication of when these characters came into their own outside of just simple trial and error, or that their levelling was more universally consistent. 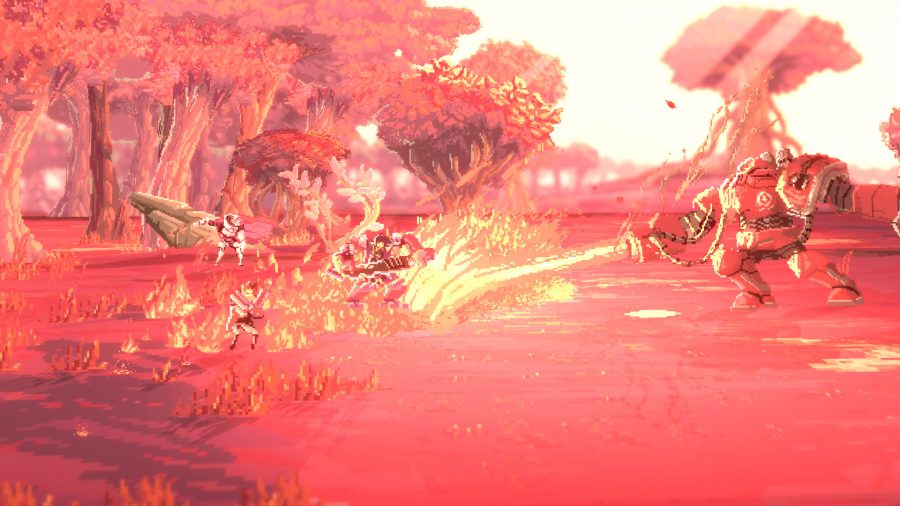 Mitigating damage in combat is also important because as your shield bar will regenerate between battles, your health bar does not. So, short of finding health regen pickups on the world map – which are few and far between – you are stuck with the health bar you have going into the next battle. This creates tension, but it can feel punishing when luck deals you a bad run despite you taking actions that are close to optimal.

Granted, procedurally generated games and roguelikes often have ‘bad runs’ that feel like there’s nothing you could have done to prevent them, but Star Renegades can feel particularly egregious in this regard. One bad battle can start an unrecoverable spiral to failure, regardless of how well the rest of the game was going. Sometimes there isn’t even a spiral first, like when you meet the Chimera – boss of the second planet – whose spike in difficulty comes from nowhere and is harsh to the point of feeling unfair.

Camping – which happens between days of planet liberation – is where your characters exchange goods and pleasantries in the form of cards. Characters have cards that regain HP, buff damage, or add small abilities to attacks for a limited number of battles. All will deepen the relationship between the characters doing the exchanging, and as that relationship grows, so will their passive abilities. They can also learn teamwork combo abilities à la Chrono Trigger that can be pretty devastating, but often require such investment that I rarely found them worth the time. 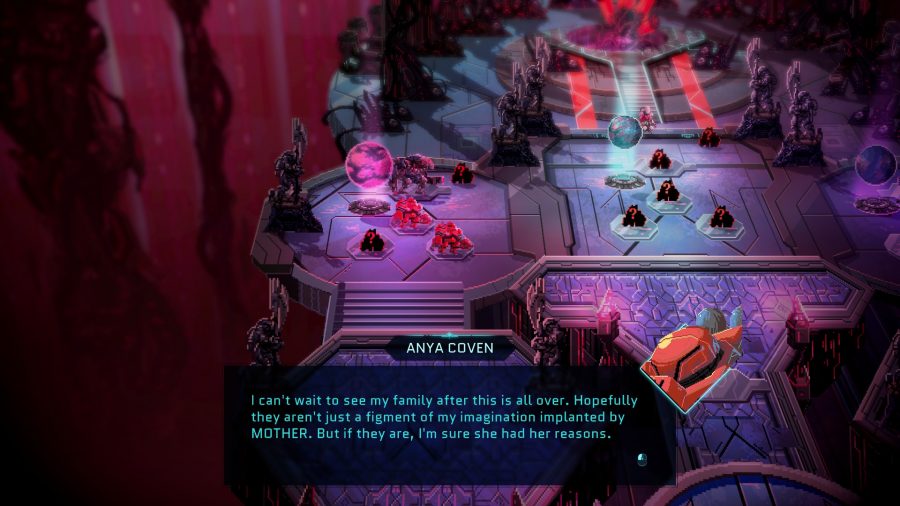 The combat and challenge of getting to the mothership was enough to keep me hooked for hours, but I found that the meta progression – the stuff that carries over from run to run – did much less to entice. You’ll exhaust the stuff you can buy with the carry-over currencies pretty quickly. Classes will gain permanent stats as your intel tier goes up, but not in any manner that you can control. Outside of unlocking new classes to play, you won’t find much else new to do once you’ve cleared a few times.

That said, when you’re deep into Star Renegades, there is plenty to get excited about. Even the most trivial battles feel like interesting puzzles thanks to the truly special combat design. This can carry you for dozens of hours, since there’s really nothing else like it out there right now. It’s so good that it helps mitigate some of the less consistent character balancing, difficulty spikes, and samey map presentation that many of its ilk wouldn’t be able to overcome.

This is a fun, fresh take on classic JRPG tropes and modern roguelike design, but it needs more to sustain interest from run to run.