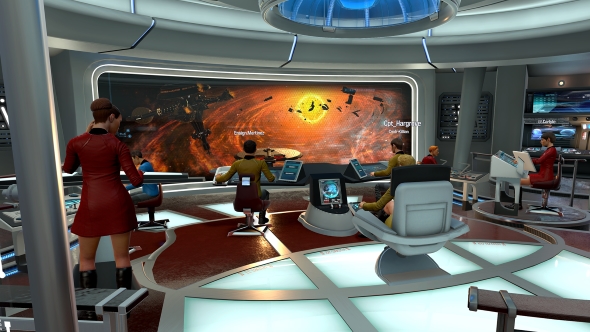 Space seems to be as popular now as it was when we first launched a rocket into it. Star Trek Discovery is wowing people on Netflix, as is the U.S.S Callister episode of Black Mirror, and a huge new Star Wars movie is still playing in cinemas. But what if you want to pilot shiny spaceships yourself? Short of applying for a place at NASA you can play Star Trek: Bridge Crew.

The previously VR-only game is now playable without fancy sci-fi goggles, meaning you need just a mouse and a crew to start your voyages into uncharted space. PCGamesN happens to have those required components so we decided to head out on our own expedition.

Acting as captain of the ship is our news editor Richard Scott-Jones, while deputy editor Julian Benson is our helmsman. Looking after weapons and sensors is games editor Matt Purslow, and – making sure everything goes smoothly – channel editor Alice Liguori heads up engineering. You can see our adventures play out like an episode of Star Trek in the video above, but if you are interested on our thoughts on how Bridge Crew works outside of VR, read Matt and Julian’s thoughts below. 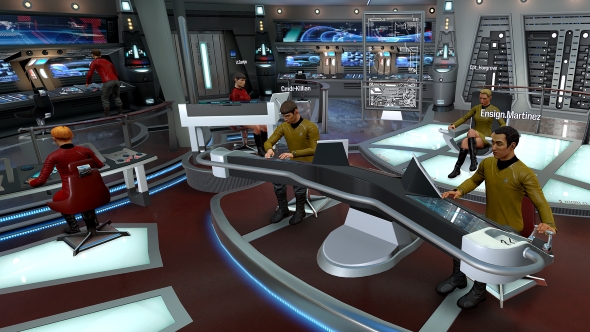 Matt: So, Star Trek: Bridge Crew has lost a dimension, but it is suddenly now accessible to teams who don’t have four VR headsets. That means millions of people are able to play, in comparison to the… ten or maybe 12 people who could before. The big question, of course, is should they play?

First thing’s first: Bridge Crew controls very differently as a non-VR game. Instead of using your actual limbs to activate the ship’s systems with motion controls, you simply use a mouse to click on buttons. That means the tactile feeling of interacting with a spaceship is lost, for the most part. The actual core of the game, though – the issuing of orders, assessing threats, and reacting to problems – is exactly the same, sans the goggles. Is it worth playing without the ‘feel’ of the bridge surrounding you, then?

Julian: I’ll admit, I was disappointed when I first loaded into the bridge of the Aegis. I’d been looking forward to playing Bridge Crew since it was announced but I quickly found helm to be quite a dull position. The console has a slider to adjust speed (though that’s strictly limited to how much power engineering directs to the engines), a little circular touchpad you drag a cursor across to direct the ship, and, every now and then, you can go to a map screen to plot a course to a position you can travel to by impulse drive or warp.

While this all might be enough to get on with when you are looking about the bridge in a VR headset, I found that sat looking at my monitor it was easy and unrewarding.

How is it being on tactical? 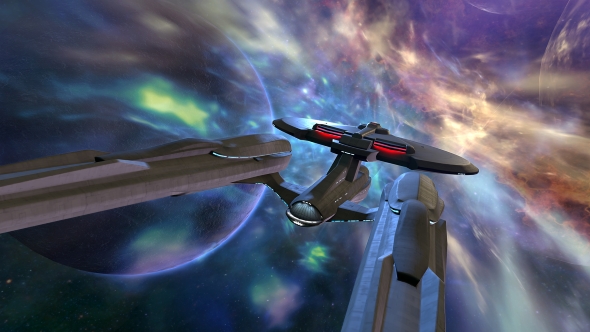 Matt: I was certainly more impressed than your initial impressions, but that is because the tactical position is notably more complicated than helmsman. Rather than piloting the ship, tactical is in charge of scanning targets, hacking ships, transporting cargo, managing shields, loading torpedo bays (takes breath), and shooting down enemy vessels. Yup, you are a busy Vulcan when on tactical, and the lack of VR does not diminish the fun of successfully smelting a Klingon ship with a double photon torpedo blast.

Our missions with a full crew went very smoothly. A bit too smoothly, though. The first chapters of the campaign are OK for introducing the concepts, but they lack any real excitement or challenge. That is why we have played without Rich and Alice in a couple of ‘advanced’ missions. Those are… well, a different story. I played Captain, and with both you and the AI relying on me in a mission that had half-a-dozen Klingons melting our shields the moment we exited warp, staying calm was notably more challenging.

Jules: Yeah, those later missions when we were manning multiple posts were much more what I was hoping for – red alert going off constantly, panels exploding, having to read out damage reports. I was switching between engineering and tactical at that point and I was being faced with decisions constantly, like lowering our shields so we could up the power to phasers and attack the enemy Klingon vessels at a longer distance.

There was a particularly hairy battle when we ended up fighting three Klingon vessels and were knocked down to about 10% health. The tension was palpable over voice chat as I watched the torpedo tubes reload and we were able to fire them just before the AI could destroy us.

Shame the system’s star exploded and killed us. 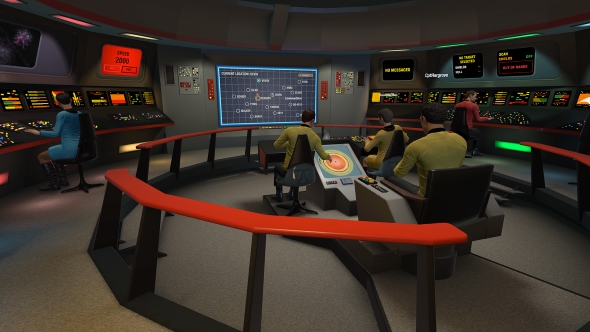 Matt: Uh, yeah. That one is on me. We had spent so much time swerving the ship around, trying to keep enemies in the Aegis’ firing arc, that we completely failed to rescue the stranded survivors before the star burst like a napalm water balloon. The warp coils were so close to powering up, too!

It is clear that Bridge Crew is simply more fun when the pressure is just a little too much to handle. We probably could have completed a couple more of the objectives had we been operating with a full crew, but just two of us trying to keep the ship running really pushed us. Had Alice and Rich been around for our second session, I think we would have experienced both the madness and the satisfaction that Bridge Crew can offer.

We are gluttons for punishment, though, so naturally we upped the difficulty again. Bridge Crew allows you to command the original 1960s USS Enterprise, complete with seemingly endless banks of unlabeled analogue buttons and an almost complete absence of personal data screens. Flying it is… well… how did you find the Original Series ship, Julian?

Jules: I loved it for the WTF moment of you asking for the warp drive to be powered up and me just looking at a bank of blank buttons with no idea what any of them did. I think I spent a good five minutes stalling you while I pressed every button to see what they did. At one point I thought I’d finally worked it out: I was pressing a button that made the screen flash up something about the warp drive and another button seemed to increase the power bar. It turned out I was actually looking at the screen that told me the damage reports for different sections of the ship, and the button I thought was charging the warp coils was actually assigning repair crews to the engines.

It was a real challenge getting that ship to do anything without bringing up the help overlay, but I think we were getting it towards the end. I mean, we managed to destroy that Romulan Warbird. Right? 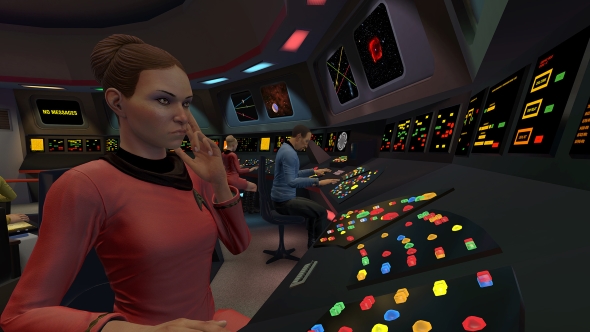 Matt: Just about. As captain your main tool is a bloody clipboard, and simply working out what orders need to be issued to the crew is a headache. The touchscreen nature of the default ship’s controls, plus the fact that the modern Captain’s chair can produce hologram maps, means that plotting a course is normally a breeze. But on the original Enterprise you need to use the main viewscreen to display maps – which means no-one can see what’s going on outside – and use a handful of toggle switches to switch between warp and impulse maps, switching through a variety of targets, locking in a target, and then issuing the command. A far cry from the point-and-go systems of the modern Aegis.

It is really good fun in a nostalgic way, but the translation from VR to mouse has resulted in really finicky controls. The clean touchscreens of the Aegis, plus the fact that every input is far more streamlined, means it works pretty well with traditional controllers. But the Enterprise requires so many button presses, and those buttons are incredibly close together on the instrument panels. I found that even with a controller as precise as a mouse I was clicking the wrong things. Your avatar’s hand model obscures the controls, which brings more frustration, and that really isn’t welcome when you are already dealing with a challenging ship design and harder missions. I imagine it is a retro joy in VR, but for further adventures I think I’ll be sticking with the newer, shinier model.

Jules: One day we will be proficient enough to fly the Enterprise without the instruction manual. Until then, we will just have to repeatedly go out in a blaze of glory.

I’ve got to say, after my initial disappointment, I loved our later games. There’s a joy to having far more problems than a reasonable person can cope with, while also fiddling with multiple confusing control panels. I am definitely going to be diving back into Bridge Crew in the future, boldly going where no-one has gone before.