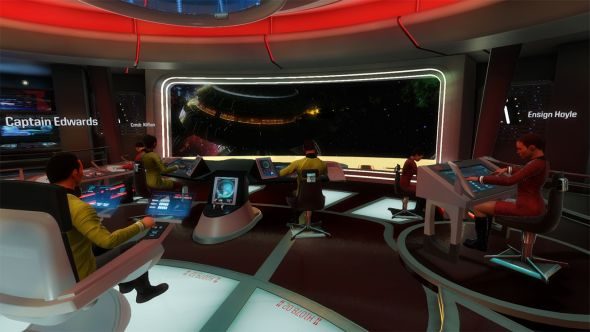 Ubisoft have delayed Star Trek: Bridge Crew, originally set to release on March 14. When it does finally release, however, it’ll do so with a sexy new feature:  the bridge from the original U.S.S. Enterprise.

Get your fix with our list of the best space games for now.

Originally, players could only take over the Enterprise’s sister ship, the Aegis, so the addition of the more iconic ship is certainly welcome.

If it sounds good to you, all you need is an Oculus Rift or a HTC Vive, and three friends who also own headsets.

The Ubisoft-published game is certainly niche, but Ubisoft have been taking some confident risks in the VR space lately. They’re certainly the most keen on VR out of all the big publishers.

Developed by Ubisoft’s Red Storm Entertainment studio, the game requires four friends to man the different sections of the ship and work together to fight off any intergalactic threats.

As for the addition of the U.S.S. Enterprise’s bridge, “We felt it was important to include a part of classic Star Trek with this game, especially during Star Trek’s 50th anniversary,” said senior creative director David Votypka. “The original U.S.S. Enterprise is such an iconic part of the franchise – it’s the ship that started it all.

“The adventures and relationships that took place on the ship are a special part of Star Trek history, so we were determined to give players the opportunity to create their own adventures and stories on this classic ship.”