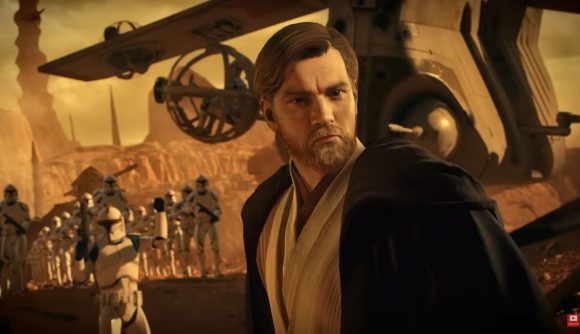 Hey, remember Star Wars Battlefront II? It came out a year ago, around the time of that ruckus about loot boxes. Well, no matter: next week, Battlefront II will get a free chunk of free DLC in the form of a brand new Geonosis map and prequel-era Obi-Wan Kenobi.

The Battle of Geonosis expansion adds the new Clone Wars-themed Galactic Assault map to Battlefront II’s rotation. It’s kind of the New Mexico to Tatooine’s Arizona: they’re close together and both have harsh, desert surfaces. Geonosis, however, is characterized by spindly rock formations that form tall towers that rise above the ground.

Geonosis was also the construction site for the first Death Star, which has a lot to do with why it’s an unpleasant place to visit. That is, unless you’re a battle droid or clone trooper, which is who you’ll be fighting as when this map rolls out November 28. The trailer shows Obi-Wan landing on Geonosis along with a legion of clone troopers.

“The Clone Wars have begun,” he says, as footage jumps to Obi-Wan leaping toward a droid and slicing it with his lightsaber.

However you feel about the current run of Battlefront games, they’ve pulled off some great-looking environments, as you can see in the trailer:


General Grievous, who carries four lightsabers and showed up in Battlefront II’s October 30 update, is seen scuttling around the battlefield like a bug before popping up and whirling his blades around, laughing like an evil maniac.

It’s true that this is an unpleasant reminder of Episode II, but the good news is that Battlefront II actually looks better than that movie did. Plus, since the initial fury over its loot box system, EA has actually made Battlefront II relatively generous if you want to buy skins.

If you’re curious about Battlefront II and held off because of the controversy when it launched, now’s an ideal time to pick it up for PC – Origin is selling the game for $7.49 USD.